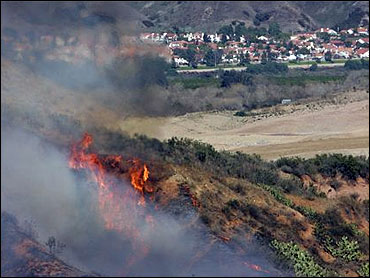 A wildfire that authorities believe was sparked by remnants of a controlled burn grew in size overnight but crews made significant progress in containing it, officials said Wednesday.

The blaze just east of the cities of Orange and Anaheim had burned 7,179 acres and was 18 percent contained, said Dennis Shell, a spokesman for the Orange County Fire Authority. However, temperatures were rising, humidity was falling and Santa Ana winds were whipping up, he said.

"Today's going to be a very critical day for us," Shell said.

Remnants of a controlled burn fanned to life by Santa Ana winds are believed to have caused the blaze, which triggered the evacuation of more than 2,000 homes, a U.S. Forest Service official said.

Despite gusty Santa Ana winds, no homes had been lost in the blaze in northeastern Orange County. Evacuation orders were lifted Tuesday afternoon, and Chief Rich Hawkins of the Cleveland National Forest apologized to those displaced from neighborhoods in the cities of Orange and Anaheim about 35 miles southeast of Los Angeles.

"I am very regretful of the situation I find myself in tonight," Hawkins told reporters Tuesday. "The fact that nobody's home has burned down and no one's been killed, that's a godsend."

The blaze broke out around 4:45 a.m. and may have been sparked by a vehicle fire, said Los Angeles County Fire Capt. Mark Savage. Officials found a burned out vehicle on the scene, he said.

No homes were immediately threatened and no evacuations had been ordered, Los Angeles County Fire Inspector Jason Hurd said.

Hawkins said fire crews ignited a prescribed burn last Thursday in a 10-acre forest area, and at the time no Santa Ana winds were predicted for at least five days.

"After they did this burn, the weather forecast changed, but that's no excuse," Hawkins said. "We had several days to mop that up with our fire engines. Apparently, there was still some fire underground."

Roots and other material can continue to burn underground if not fully mopped up.

Hawkins noted that the apparent cause would not be considered final for two weeks because several people in a pickup truck had been seen in the area where the wildfire roared to life early Monday.

Some residents had managed to return to evacuated areas before the evacuation order was lifted, or had never left so they could protect their homes in case the fire approached.

"Anybody that has a (wood) shake roof stayed. Anybody that's been through this before stayed," said 56-year-old Charles Morse, a longtime resident of Maybury Park in Orange, whose home has the wooden shingles.

Another Maybury Park resident, Kathy Choi, 76, said she couldn't leave home because her poor eyesight prevented her from driving. She said she spent the night listening to TV reports and slept in her recliner to be better prepared in case she needed to flee.

"I believe in the sixth sense and my sixth sense was pretty calm," she said. "My neighbors all keep tabs on me."