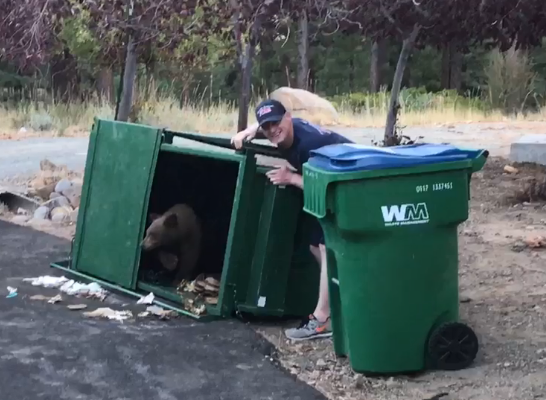 Once upon a time there were three little bears who were looking for a little midnight snack. They tried one garbage can, too small. A second, too smelly. The last one was just right, but there was just one small problem: they all got stuck.

Saturday night, those working at the Truckee Meadows Fire Protection District Station 39 in Reno, Nevada, were woken to the sound of a tipped over garbage bin, they wrote in a Facebook post Monday. In the morning, an "agitated momma" bear was seen watching over the bin.

Firefighter and paramedic Ed Martin is seen opening the overturned garbage bin with what appears to be a long pole, in a video posted to the district's Facebook page. Soon enough, three bear cubs scampered out, one by one, and ran for the woods.

While Martin was freeing the cubs, engineer Patrick Walsh was deterring the mother bear. The mission went off without a hitch.

These cubs -- and their watchful mom -- deserve a big pot of honey after that late night adventure.