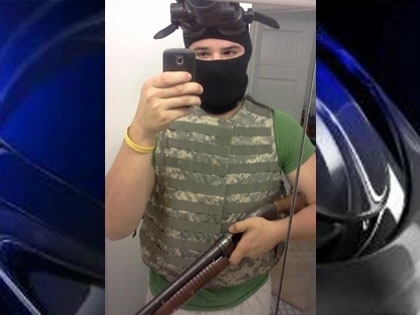 (CBS) CHICAGO - Nicholas Claxton was so upset after being fired last month that he allegedly sent a series of threatening text messages to his former supervisor, causing police to arrest him, prosecutors told CBS Chicago.

One of the messages Claxton, 23, allegedly sent to his former supervisor was a photo of him in a ballistics vest, wearing night-vision goggles and holding a shotgun.

On Tuesday, Claxton was charged with cyber-stalking. Previously convicted on a weapons charge, he is also charged with unlawful use of a weapon by a felon.

The former supervisor, an owner of a restaurant, asked to remain anonymous before speaking with CBS Chicago.

"It was that image when we realized the gravity of the situation. We just felt it was very important for us to act quickly and with a sense of urgency based on the image we saw," he said.

In the wake of the Colorado and Wisconsin shootings, the owner immediately contacted local police, who in turn contacted Chicago police, reports CBS Chicago.

Claxton was arrested on Tuesday and police searched his home, finding a sawed off shotgun and a sling to make it concealable.

The restaurant owner was glad that Claxton had been arrested without anyone getting hurt.

"We are very fortunate that this situation turned out the way it should have and everyone is safe," the restaurateur told CBS Chicago.