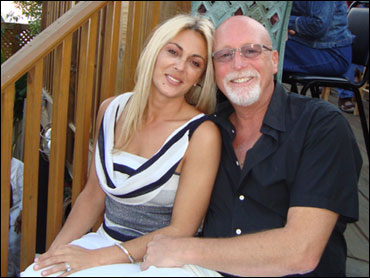 Kiker said he learned that afternoon that Janke's wife is an adult film star, and word quickly spread. The elected officials took the action a few hours later.

"At no time did we make a judgment call on the activities of Mr. Janke or his wife," Kiker told The Associated Press. "It's a matter of how effective he becomes after this situation. How much disruption there is."

Kiker said a clause in Janke's contract permitted the council to fire him with a majority vote. He said he considers the Jankes friends.

"Our heads are held high," Scott Janke said. "We have nothing to be embarrassed about. We've done nothing wrong."

Janke said the mayor called him before the meeting, but didn't invite him to attend. He said Kiker called after the meeting to tell him the outcome, and Janke said he hasn't heard from him or any council member since. Janke will get a severance package worth six months salary, which comes to about $50,000, plus health benefits.

Janke said he and his wife were married in October and are taking care of their three teenage children. He wouldn't comment on any possible legal action against the town.

Kiker acknowledged that Janke had violated no rules or laws and added that he had done a good job for the island town that had about 6,500 people, according to the 2000 Census. But the mayor was concerned whether Janke could remain effective and not distract the community from the business of the town along the state's west coast.

"One of the reasons we brought him here is that there were some divisive problems on the beach," Kiker said. "We wanted him to bring people together."

Councilman Tom Babcock, responding to residents' questions, said at a council meeting Wednesday that Janke was fired because his wife's profession brought an inaccurate image to Fort Myers Beach, according to the News-Press of Fort Myers.

"When you become a public figure you are held to a different level of scrutiny and ethics," Babcock said.

Janke said it's too early to think about what's next.

"A termination on a resume does not look good, no matter what the reason," Janke said.

Janke began working for Fort Myers Beach in March 2008. He has also worked for the City of Marathon in the Keys and for various local governments throughout Alaska since 1989.