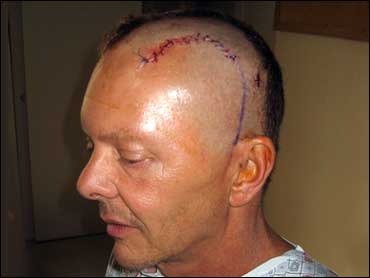 A CBS News producer whose skull was fractured while he was vacationing last year sued the network, charging he was discriminated against for being gay and was fired for publicly discussing the attack.

Richard N. Jefferson, 52, claims in papers filed Monday in Manhattan's state Supreme Court that CBS officials harassed him based upon his sexual orientation, then fired him because he complained about it.

CBS spokeswoman Sandra Genelius issued a statement calling the suit "unequivocally baseless." Jefferson's contract was not renewed "due to legitimate issues with his performance that had been previously discussed with him," she said.

Jefferson, who started as a producer for CBS in January 1989 and worked several jobs until he was fired Nov. 20, 2006, said Monday his problems stemmed from the vicious assault he suffered April 6, 2006, on St. Maarten in the Caribbean.

Jefferson said strangers nearly hit him and a friend with a car as they left a casino. The men in the car then smashed his head with a tire iron and attacked his colleague.

Jefferson said he called CBS and the network sent an air ambulance to lift him and his severely injured friend out of Philipsburg, the island's largest city, a consideration that he says probably saved his friend's life.

But back at work, Jefferson said, senior vice president Linda Mason tried to control his public comments about the incident, telling him, "If you get involved in advocacy issues, we might ask you to take a leave of absence."

"She told me this was a gay rights issue and I said it had nothing to do with gay rights; I was the victim of a crime," Jefferson said.

Jefferson claims CBS "improperly pried into his private life, dictated his after hours activities, restricted his First Amendment rights, created false complaints about his performance," and then "terminated him on the basis of his sexual orientation."

Genelius said in her news release that Jefferson's lawsuit reveals "a stunningly selective recall of the facts."

CBS News supported Jefferson's "right to discuss the attack publicly and to seek justice, which he clearly did," Genelius said.

Last November, four people were convicted of public violence and causing grievous bodily harm in the attack and sentenced to terms ranging from six months to six years in prison.