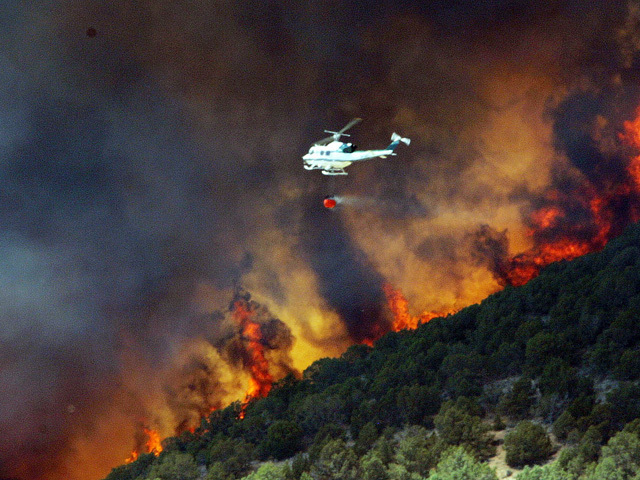 (AP) SARATOGA SPRINGS, Utah - Residents of at least 1,500 homes in northern Utah were being evacuated Friday after high winds kicked up a fire started by target shooters.

Authorities were initially worried as flames moved toward property owned by an explosives company. But as winds kicked up, the fire began moving toward Saratoga Springs, and crews began focusing on saving homes, said Jason Curry, a spokesman for the Utah Division of Forestry, Fire and State Lands.

On Friday, fire officials were calling in additional aircraft and extra ground crews.

Bureau of Land Management officials say they believe the blaze was caused when a bullet hit a rock and sparked the fire. This is the 20th target-shooting related fire this year in Utah, they said.

Curry said one firefighter had suffered minor burns, and no structural damage had been reported.

A continued mix of hot, windy and extremely dry conditions has raised the fire danger across Utah and parts of Wyoming, Arizona, Nevada and Colorado.

At a wildfire burning on over 68,000 acres in northern Colorado, some homes were being evacuated Friday because of several spot fires started by winds outside the main fire. Some of those residents were evacuated after the fire flared up on Sunday and had only returned home Wednesday.

The mix of conditions that makes it easy for new fires to start and spread and cause existing fires to flare up is expected to last through Saturday there.

The fire west of Fort Collins has now destroyed at least 191 homes. It's also blamed for the death of a woman found dead at her ranch.

The northern Colorado fire will have $5 million more available, on top of $20 million made available by a previous order. The fire has qualified for 75 percent federal reimbursement for firefighting costs, Hickenlooper's office said. A fire near Lake George will get $1 million, and the Stuart Hole fire in Larimer County will receive $200,000. The disaster money is coming partly from reserve funds.

Meanwhile, the Village People will perform a free concert Saturday in Ignacio, Colo., to raise money for relief efforts at smaller wildfires in Colorado and New Mexico, The Farmington Daily-Times (http://bit.ly/KZy86u ) reported.

Those attending the show at the Sky Ute Casino will be asked to give cash donations to help relief efforts at a wildfire that's been burning for over a month near Pagosa Springs and a blaze along the San Juan River that destroyed three structures in far northwestern New Mexico.

— In Colorado, heat and low humidity is also a concern at the 1,150-acre wildfire burning near Lake George, which is 57 percent contained. A fire burning for over a month near Pagosa Springs has grown by about 1,300 acres in the last 24 hours. Two ranches have been evacuated.

— In Nevada, a wildfire that has charred nearly 12,000 acres of rugged terrain in northeast Nevada near the Utah line is 60 percent contained. It was started by a planned burn that escaped June 9.

— In California, residents were allowed to return to homes and cabins near a 385-acre fire near Sequoia National Park, and firefighters fully contained the blaze Thursday. A body was found at the scene of a small brushfire in the San Fernando Valley and authorities were trying to determine whether it was dumped there.

— In Wyoming, crews were preparing safety zones where firefighters can flee in case a wildfire that has scorched more than 4.5 square miles in Medicine Bow National Forest makes a run. It's 10 percent contained.

— In New Mexico, a fire that has destroyed 242 homes and businesses, the largest in state history, has blackened 463 square miles in the Gila Wilderness and is 80 percent contained. Meanwhile, a 360-acre fire along the Rio Grande on the northern edge of Albuquerque was 50 percent contained. Nearby residents were on alert, but no one has been evacuated.

— In Arizona, officials battling a wildfire in eastern Arizona say they're prepared for high winds and low humidity. Firefighters have created containments lines around the community of Young and burned out fuel ahead of the fire. Crews are reinforcing those lines and patrolling for spot fires. The Poco Fire is nearly 12,000 acres and 25 percent contained. More than 740 people and several helicopters are fighting the fire.

— In Hawaii, the largest wildfire of the season has scorched at least 5,200 acres on the Big Island.