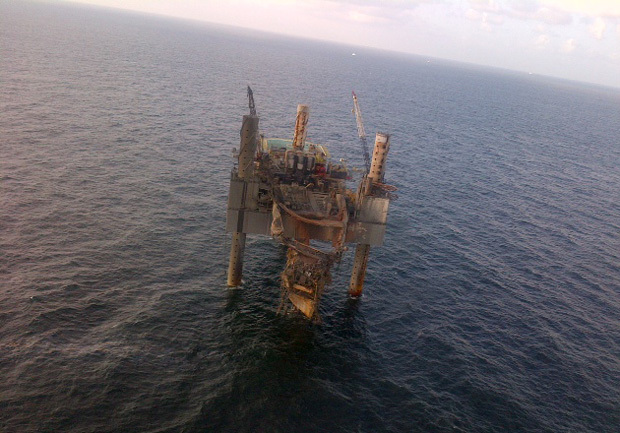 NEW ORLEANS Officials say the fire is out at a natural gas well in the Gulf of Mexico that blew wild earlier in the week.

Natural gas stopped flowing from the well earlier Thursday, and the remaining fire had been fueled by residual gas. Authorities believe the flowing gas became blocked by sand and sediment in the well.

The Coast Guard and a spokesman for one of the companies involved confirmed that the fire was out at midday.

Air and water travel restrictions remain in effect in the area, and officials are working to determine the next steps in securing the well.

Because the well involved is a natural gas well, not an oil well, experts said the pollution threats are far less than those posed by some previous accidents.

Gas wells often also have oil or other hydrocarbons as well as natural gas. Officials and scientists agree the latest mishap should not be nearly as damaging as the BP oil spill, also in the Gulf of Mexico, that sent crude oil oozing ashore in 2010.

"A gas well's not going to result in any kind of major pollution — perhaps not even significant pollution if it's burning," Bourgoyne said.

University of Georgia marine scientist Samantha "Mandy" Joye also said the pollution and health dangers posed by a gas well are quite different than those posed at the well where the Deepwater Horizon rig blew up in 2010, killing 11 people and spewing millions of gallons of oil for weeks.

"The biggest danger from gas is that it is extremely flammable. At high concentration, gas exposure can cause health issues (vomiting, headaches, and worse) but such high levels are not likely to be reached in warm, shallow waters," Joye wrote in an email response to questions. She planned a trip to the area later this week to take water samples for analysis.

Tuesday's blowout, which prompted the safe evacuation of 44 workers, occurred at a drilling rig adjacent to a natural gas platform that wasn't producing gas at the time. The rig was completing a "sidetrack well," which drills into the same well hole under the platform. Such wells are used to remedy an obstruction or to access a different part of the gas reserve.

Gas spewed throughout the day and ignited late Tuesday night. The cause of the blowout was under investigation, one being overseen by the federal Bureau of Safety and Environmental Enforcement.

By Wednesday evening, the derrick and drill floor structure had collapsed. A fireboat was pumping water on the rig in an effort to keep as much of it as cool as possible.

The Coast Guard maintained traffic restrictions within 500 meters of the site and the Federal Aviation Administration restricted aircraft up to 2,000 feet over the area. The blowout and fire were not expected to affect Thursday's opening of the Grand Isle Tarpon Rodeo, a major tourist draw on the state's only inhabited barrier island, said Jefferson Parish Council member Chris Roberts.

"We are singularly focused on coming up with an action plan that would regain control over the well," said James Noe, an executive with Hercules Offshore Inc., which was operating the rig for Walters Oil & Gas, an exploration and production company.

Natural gas — mostly methane — is far more soluble than oil, meaning it more easily dissolves, dilutes and disperses than crude oil, said Donald Boesch, president of the University of Maryland's Center for Environmental Science and a member of the federal panel that investigated the BP oil spill. That means concentrations would be far less lethal to the marine environment, he said.

Joye said the accident, the second blowout off the Louisiana coast this month, does raise concerns about whether more regulation is needed.

"I believe that BSEE is taking rig safety very seriously, but more active rigs give rise to more opportunity for problems. Accidents can happen," she said.

Environmentalists in Louisiana said the accident proves the need for strong oversight of offshore operations.

Darryl Maleck-Wiley of the Sierra Club said, "Once again this is highlighting the dangerous nature of oil and gas operations in the Gulf and that we need aggressive inspection programs of these operations by the federal government."