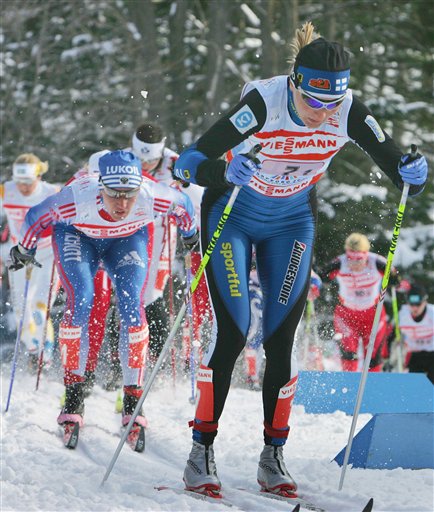 Finland coasted to victory on Thursday in the women's 4 x 5 kilometer cross-country relay at the Nordic World Ski Championships.

Finland opened a comfortable 30-second lead heading into the final leg and Pirjo Manninen crossed the finish line as the Finns took the gold medal with a time of 54 minutes, 18.6 seconds.

The excitement was saved for second place, when Evi Stehle Sachenbacher overtook Norway's Astrid Jacobsen in the stretch to give Germany the silver medal, 11.9 seconds back.

Defending champion Norway finished 15.7 seconds off the pace to collect the bronze medal.

Germany also won the silver at the Turin Olympics, where Sachenbacher was a member of the team.

Finland was in control throughout the event. World Cup leader Virpi Kuitunen, who pulled out of Tuesday's 10-kilometer race citing health problems, gave her team a big lead after the first leg.

The 2007 championships mark the first time the meet is being held as an independent event in Asia. In 1972, when the Winter Olympics were held in Sapporo, they doubled as the FIS World Ski Championships.