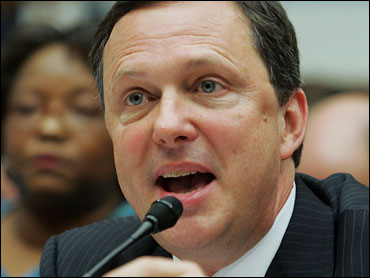 A combative Michael Brown blamed the Louisiana governor, the New Orleans mayor and even the Bush White House that appointed him for the dismal response to Hurricane Katrina in a fiery appearance Tuesday before Congress.

Louisiana Gov. Kathleen Blanco was getting her chance to tell her side of the story in a Senate hearing on Capitol Hill Wednesday. However, in her opening statement, she made no reference to Brown, reports CBS News Capitol Hill Correspondent Bob Fuss.

In response, lawmakers alternately lambasted and mocked the former FEMA director, who has come to symbolize what went wrong with the federal government's response to the disaster.

House members' scorching treatment of Brown, in a hearing stretching nearly 6½ hours, underscored how he has become an emblem of the deaths, lingering floods and stranded survivors after the Aug. 29 storm. Brown resigned Sept. 12 after being relieved of his onsite command of the Federal Emergency Management Agency's response effort three days earlier.

"I'm happy you left," said Rep. Christopher Shays, R-Conn. "Because that kind of, you know, look in the lights like a deer tells me that you weren't capable to do the job."

At several points, Brown turned red in the face and slapped the table in front of him.

"What I wanted you to do is do your job and coordinate," Shays retorted.

Well aware of President Bush's sunken poll ratings, legislators of both parties tried to distance themselves from the federal preparations for Katrina and the storm's aftermath that together claimed the lives of more than 1,000 people in Louisiana, Mississippi and Alabama.

Brown acknowledged making mistakes during the storm and subsequent flooding that devastated the Gulf Coast. But he accused New Orleans Mayor Ray Nagin and Blanco, both Democrats, of fostering chaos and failing to order a mandatory evacuation more than a day before Katrina hit.

"My biggest mistake was not recognizing by Saturday that Louisiana was dysfunctional," Brown told a special panel set up by House Republican leaders to investigate the catastrophe.

Blanco was scheduled for one of half a dozen hearings on both sides of the capitol Wednesday as Congress begins to focus in more closely on Katrina, reports Fuss — both what went wrong and what's needed now in the Gulf region, from tax packages to help rebuilding to the threat of fraud in the reconstruction.

Many in Congress feel FEMA needs more money, more equipment, a more autonomy than it now has under Homeland Security, reports CBS News Correspondent Bob Orr — something that Brown seemed to confirm during the hearing.

"He said that he asked for the money, but he wasn't given the money to deal with it," Shays said Wednesday on CBS News' The Early Show. "He also said that the department was eviscerated in the last three years, and he spoke up privately about it but never publicly made it an issue."

Asked about Brown's claim that his agency's funding had been cut and that state and local officials were to blame for many response failures, White House spokesman Scott McClellan Wednesday said, "Washington tends to get caught up on bickering and finger-pointing. The president is focused on problem-solving."

Brown also said he warned President Bush, White House chief of staff Andrew Card and deputy chief of staff Joe Hagin that "this is going to be a bad one" in e-mails and phone conversations leading up to the storm. Under pointed questioning, he said some needs outlined to the White House, Pentagon and Homeland Security Department were not answered in "the timeline that we requested."

In Miami, Homeland Security Secretary Michael Chertoff told reporters that Brown "speaks for himself and he's entitled to his point of view, and I don't have anything to add."

Most Democrats, seeking an independent investigation, stayed away to protest what they called an unfair probe of the Republican administration by GOP lawmakers.

"I very strongly personally regret that I was unable to persuade Governor Blanco and Mayor Nagin to sit down, get over their differences and work together," Brown said. "I just couldn't pull that off."

Blanco vehemently denied that she waited until the eve of the storm to order an evacuation of New Orleans. She said her order came on the morning of Aug. 27 — two days before the storm — resulting in 1.3 million people evacuating the city.

"Such falsehoods and misleading statements, made under oath before Congress, are shocking," Blanco said in a statement.

In New Orleans, Nagin said that "it's too early to get into name-blame and all that stuff" but that "a FEMA director in Washington trying to deflect attention is unbelievable to me."

Brown, who remains on FEMA's payroll for two more weeks before he leaves his annual $148,000 post, rejected accusations that he was inexperienced for the job he held for more than two years during which he oversaw 150 federally-declared disasters. Before joining FEMA in 2001, he was an attorney, held local government posts and headed the International Arabian Horse Association.

"I know what I'm doing, and I think I do a pretty darn good job of it," he said.

He said FEMA coordinates and manages disaster relief, but the emergency first response is the job of state and local authorities. Brown also said the agency was stretched too thin to respond to a catastrophe of Katrina's size. "We were prepared but overwhelmed is the best way I can put it," he said.

"I don't know how you can sleep at night," Rep. Kay Granger, R-Texas, said. "You lost the battle."

Brown, his voice dropping slightly, responded: "I probably should have just resigned my post earlier and gone public with some of these things because I have a great admiration for the men and women of FEMA and what they do, and they don't deserve what they've been getting."