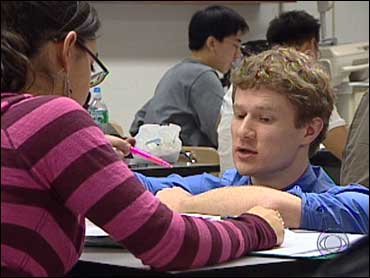 In the sinking economy, where can Americans turn for a job that pays well? CBS News correspondent Michelle Miller reports for the series Hard Times, Good Jobs that the education sector is hiring - and teaching experience isn't necessary.

After 22 years as a corporate lawyer, Debbie Kurtzberg wanted to check out a new career, one more stable and satisfying: teaching elementary school.

"One of the factors was that I would definitely be able to get a job," said Kurtzberg.

Becoming a teacher at age 50 isn't nearly as difficult as Kurtzberg expected. She learned it can be done with just two years of graduate school.

"I also discovered how valuable and influential my son's teachers were to his life, and I wanted to be a part of that world," she said.

Good reasons - especially when the latest employment numbers tell a grim tale: 63,000 jobs were lost in February. But the healthcare and education sector was an exception, with a gain of 30,000.

The Department of Education says there's a critical need for teachers in inner-city schools and rural areas, especially in math and science and special education.

"It's definitely possible to become a teacher if you've never taught before," said Assistant Secretary of Education Kerri Griggs.

In fact, of the estimated 160,000 new teachers hired last year, 60,000 came from so-called "alternate routes." In other words, they are people who didn't start out with teaching degrees.

They are people like Evan Weinberg. He had a bachelor's degree in engineering but couldn't find a job he wanted. Now he's teaching high school physics in the Bronx.

And it didn't hurt that the bulk of his graduate degree was paid for. All he had to do was teach three years in the public school system.

And the perks include: