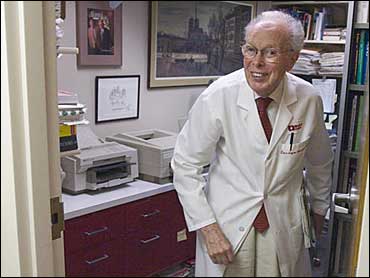 Age is not just a number to Dr. Denham Harman. It's an obsession.

Why else would an 87-year-old man rise at 4:30 each morning, drive to the University of Nebraska Medical Center by 7 and put in an eight-hour day?

Harman officially retired 17 years ago. He continues to work, unpaid, out of a cubbyhole office that seems beneath a man who is one of the 20th century's most significant researchers in the field of gerontology.

"He deserves the Nobel Prize," said Dr. Donald Ingram, acting chief of the laboratory of experimental gerontology at the National Institute on Aging in Baltimore. "He's been nominated before, but sometimes it takes a long time for a body of work to be fully appreciated. I hope he gets it while he's alive."

In 1954, Harman developed what now is the most widely accepted theory on the aging process, known as the "Free Radical Theory of Aging." In simple terms, the theory says a byproduct of oxygen use is adverse chemical reactions in cells. The result is aging and, ultimately, death.

The theory initially was, Harman said, "pooh-poohed and ridiculed" by the medical community.

By the 1980s, however, free radicals became part of research in cancer, cardiovascular disease and stroke. In recent years, free radicals have been linked to Alzheimer's disease.

Free radicals are atoms with unpaired electrons. The radicals are produced through the body's use of oxygen. According to Harman's theory, radicals damage cells in an organism, causing aging. By reducing free radicals, the aging process is slowed.

Dr. Jane Potter, section chief of Geriatrics and Gerontology in the UNMC College of Medicine, said Harman's theory was ahead of its time.

"There was a long lag between him saying this was important and others doing the research to prove it," Potter said. "The fact he was the original has been lost. There's no disagreement that he said it first. But he has been under-recognized."

Modest by nature, Harman has focused his energies on pressing for research that leads to the enhancement of life for seniors. He is driven by a quote by 18th century satirist Jonathan Swift, who wrote: "Every man desires to live long, but no one would be old."

To Harman, the issue is not increasing life span. He doubts life expectancy ever will exceed 85 years.

"We have reached the point where our living conditions are near optimum," he said. "We can do all the work we want on cancer research and heart disease, but it's not going to increase our life span. A major risk factor with those diseases is aging, and the aging process is built in."

Harman's work now is focused on applying the Free Radical Theory to help the elderly avoid a long period of decline before death.

"I'm talking about functional life span," he said. "You may not play tennis anymore, but you still get around, enjoy music or whatever your hobby is. When that period is over, you just disappear. That would be the ideal."

"So much of this is common sense," he said.

Harman, married for 60 years and the father of four, has followed his own advice throughout his life. He ran two miles a day until he was 82. He quit because of a back injury, but he continues to take regular walks to help him maintain a weight of 140 pounds on his 5-foot-10 frame. He has never smoked and drinks alcohol in moderation.

He is a big believer in nutritional supplements. Adults, he said, should take vitamins C and E and antioxidants to slow free-radical production.

Though he is a bit hard of hearing, he remains extremely sharp. His back injury has left him hunched over, but he still moves about at a brisk pace. His clean living might have a lot to do with his longevity, but he doesn't dismiss another factor: genes.

A few years ago, Harman predicted he would live to 100.

Today, he senses his mortality, largely because of his back injury, which has resulted in calcium deposits in his spine and a ruptured appendix that nearly cost him his life two years ago.

Still, he has no plans to slow down. He continues to write papers, organize symposiums on aging and keep up on correspondence emphasizing the importance of more research.

He doesn't fear death, but he has a unique perspective on living.

"I hope to God I keep going, and one of these days I won't wake up in the morning," he said. "That will be fine."