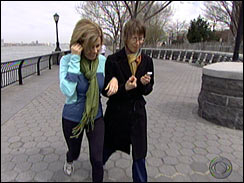 (CBS)
This post was written by CBS News producer Amy Birnbaum, who worked on this story about Parkinson's Disease and dance with Correspondent Kelly Wallace.
I've known Pam Quinn for more than ten years. Our sons have been friends since elementary school. We traveled in the same "mom pack," where it's hardly ever about who we are, it's all about the school, the sports, and now that they're in high school, the nights out. So I was surprised to learn a couple of years after we met, that she had Parkinson's disease, a debilitating movement disorder. At the time she was a professional dancer and was moving into a more lucrative career as a personal trainer. So she seemed to be managing the symptoms well. Turns out she was working hard at doing just that.

Pam had spent most of her life as a dancer, and describes the change in her life when diagnosed as "profoundly shattering." She told us, "Dance is how I earned my living, but even more essential it was how I knew myself, and how I viewed myself."

She began to battle her symptoms by using her dance training to work out specific movement problems, much the way a choreographer works out problems of rhythm, space, and motion. In a way she says she was taking back control of her body. To even out her gait, she began to kick a soccer ball inside a string bag, inspired by her soccer-loving, soccer-playing sons. It was a challenge, it was rhythmic and it helped push her left leg forward.

"It's like my leg has a kind of learning disorder," she told us, and she's trying to wake it up. 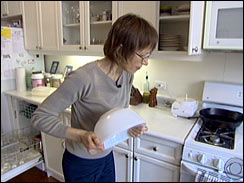 (CBS)
When she carried grocery bags, she learned how to swing them to keep her arms swinging. At home, she often turns on music and dances while emptying the dishwasher. And she never leaves home without her iPod, the music driving her beat by beat. It's really the music she says that pours into her and allows her to adjust her walk to the beat of the music.

Pam says she found out about a unique program run by the Brooklyn Parkinson Group. Dancers from the Mark Morris Dance Company, based in Brooklyn, N.Y., teach a modified dance class to people with Parkinson's. We're told it's a freeing and wonderful experience, allowing the students to explore a range of movement and stretching, and learning, really, to think like dancers. That program's been in place for six years. Pam spoke with the founder, Olie Westheimer. 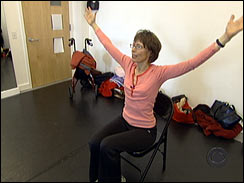 (CBS)
The group agreed to sponsor Pam's movement lab, so Pam could share with others what she calls her "grab bag of tricks." Pam likes the idea of a laboratory, so she can learn from students and students can learn from her. One student said she's learning to help herself, another says she comes alive in the class, and one of the students, Bernie, who used to do a lot of sports in his youth, says the class is inspiring.

In fact, in one exercise, they throw a succession of balls around, and Bernie, who seemed to have the most severe disability in the class, caught the ball better than others. Pam believes it's the social interaction and the element of play that is hugely important.

There's not much research into the impact of movement and music on Parkinson's, but one recent study done by the School of Medicine at Washington University in St. Louis found that Parkinson's patients who took tango lessons improved their balance more than patients who did conventional exercise. And at the University of Calgary, researchers are looking at the combination of music with daily activities, to see if music aids in making movements more fluid. Their research is as yet unpublished but they are finding that the music has to have a dance component and be somehow matched to the pace of the movement.

Pam knows what helps her. "When I'm alone in the apartment, I turn on music, and I improvise and I dance around the kitchen," exploring different types of movement, still challenging her body to dance, she told us. "I'm not the person I used to be," she says, "but I am."

As she wrote in an article for Dance Magazine, "Parkinson's disease is horrible and very frustrating. I do not wish it on anyone. That said, something deeply satisfying has also come from it. Were I never to have had this challenge, I would never have had the opportunity to understand the ways in which my training and experience fortified me for it. In that respect, my understanding of movement, of the dynamic use of the muscles particular to dance, is deeper now. My disease took dance from me, but in another way gave it back."

Twelve years after her diagnosis, Pam has managed to find the beat, and herself, again.

Brett Favre suspended from radio show amid scandal
Thanks for reading CBS NEWS.
Create your free account or log in
for more features.
View CBS News In
CBS News App Open
Chrome Safari Continue
Be the first to know
Get browser notifications for breaking news, live events, and exclusive reporting.