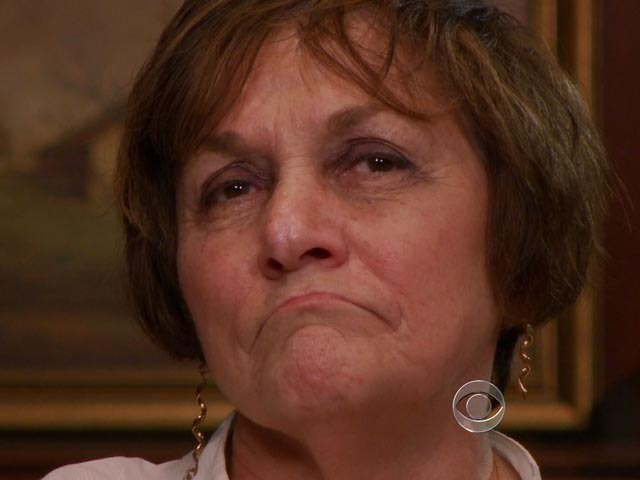 The federal government set a goal Tuesday of finding an effective treatment for Alzheimer's by 2025. More than five million Americans were living with the disease in 2010. By 2050, it could be as many as 16 million. CBS News medical correspondent Dr. Jon LaPook has been following one couple's struggle with the disease.

Carol Daly is 68 years old and suffering from advanced Alzheimer's. Her husband Mike is a retired New York City cop now working at a local library. Every day he brings Carol to work because he can't leave her alone.

"She just doesn't have the ability any more to function independently," said Mike. "She has to depend on me."

When CBS News first met Mike and Carol in 2008, she was starting an experimental drug.

LaPook: "Let me ask you a question. How old are you?"

When we visited her nearly two years later, it was clear the therapy had failed.

"How old are you?" LaPook asked her.

And this afternoon, LaPook asked Carol how old she is.

The cruel fact is: Alzheimer's patients don't get better.

At Tuesday's meeting in Washington, government advisers tried to set priorities for a national campaign to treat and manage the disease that is projected to cost more than a trillion dollars by 2050. But the plan doesn't include any funding.

Dr. Joshua Chodosh of UCLA studied the impact of Alzheimer's in California. "This is a crisis that's only going to grow enormously in the next 20 years. Now is the time to act, not when it's even worse than it is now."

The Dalys have been married for almost 48 years. Mike is frustrated with the lack of progress but isn't ready to let go.

"It's very difficult. I can't lose her," he said with emotion. "I pray to God she goes before me."

A top priority will be arming doctors with tools to recognize symptoms early.

CBS Evening News anchor Scott Pelley asked LaPook if there is no effective treatment, then what if it matter if it's found early.

"The thinking is that right now we may have effective drugs," said LaPook, "but we're giving them too late. It turns out that the changes in the brain actually start 10-20 years before the symptoms. So we have to identify the symptoms early and give the drugs then. It's like heart disease: If you wait for somebody to have five heart attacks, and he's in heart failure, and then you say, 'Why don't we give Lipitor?' It's too late. The same thing may be true for drugs for the treatment of Alzheimer's."

For more information, go to our partner in health news, WebMD.com, and search "Alzheimer's"