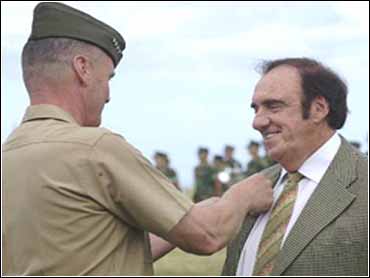 After 37 years, fictional Pfc. Gomer Pyle has achieved the promotion to lance corporal that eluded him during five years in the Marine Corps on the popular television sitcom in the 1960s.

Actor Jim Nabors, who starred in CBS's "Gomer Pyle, U.S.M.C," was pinned with the lance corporal insignia, a PFC stripe with crossed rifles, by Gen. James Jones, commandant of the Marine Corps.

It took place Thursday during a no-nonsense ceremony on a parade ground at Camp H.M. Smith, headquarters of the Marine Forces Pacific and the U.S. Pacific Command.

"Sgt. Carter would be amazed," said Jones, adding that personnel in other services probably are asking: "What in the world are the Marines doing today?"

Although Gomer Pyle, the Mayberry service station attendant Nabors created on "The Andy Griffith Show," had trouble adjusting to the Marine Corps, he displayed the attributes of a good Marine, Jones said.

"He's honest and embodies integrity. He is filled with determination. He extensively attempts to do the right thing in every circumstance. He is selfless ... and he is loyal to a fault," he said.

Nabors, 71, who lives in Honolulu, told the 300 Marines and family members attending the ceremony that reruns of "Gomer Pyle" have given him celebrity with a new generation.

Nabors said Gomer wasn't stupid like many people thought "but actually it was he only wanted to see the good side of everybody and everything."

"I'm very honored that Gen. Jones did this. It was a total surprise to me," Nabors said.