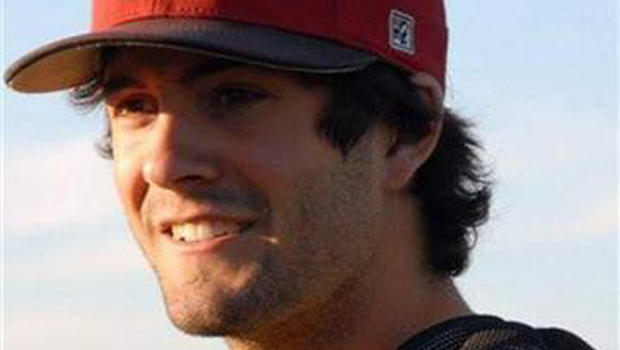 DUNCAN, Okla. - An Oklahoma teenager has been sentenced to more than a decade in prison for his role in the 2013 shooting death of an Australian baseball player in Oklahoma.

James Francis Edwards Jr., now 18, was the last of four suspects to be sentenced in the death of 22-year-old Christopher Lane in Duncan, about 80 miles southwest of Oklahoma City. Edwards, who was charged as an adult, pleaded guilty in September to being an accessory to murder.

Edwards was sentenced Tuesday to 25 years in prison, but 10 years of that was suspended, the Duncan Banner reported. He'll also receive credit for nearly three years of time served.

Lane, from Melbourne, Australia, was in Oklahoma on a baseball scholarship. He was preparing for his senior year at East Central University in Ada and visiting his girlfriend in Duncan in August 2013, when he was shot while jogging on a quiet street.

The Duncan Banner reports that Edwards was originally charged with first degree murder but the charge was changed after he agreed to testify against the other teens in the case: Chancey Allen Luna, Michael DeWayne Jones, and Odesse John David Barnes. The teens were all riding in a car together when Luna, 18, shot Banner. Police reports indicate that Jones said the motive for the shooting was boredom, reports the paper. Luna's defense attorneys said he only meant to scare the victim.

Edwards admitted in his guilty plea that he made a call from jail in September 2013 asking a friend to hide the .22-caliber revolver used to kill Lane. The friend did not have the gun, which was never recovered.

In court, Edwards blamed his behavior on being a spoiled young athlete and said he grew up after spending time in custody and at the boot camp where he was sent after pleading guilty last fall.

"The reason why I did it, I was put in a predicament I was never put on before," he said. "I was honestly scared. I'm sorry for everything that happened. I didn't get in that car to kill (Chris Lane). I'm sorry and I show remorse. Regardless of what they say, I was a dumb 15-year-old, I'm a grown man now."

"I wonder how much of this is truthful or not," said Graham of Edwards' testimony. "Your report back (from boot camp) is exemplary. All things considered, your testimony today seems like you're looking for people to blame for your behavior."

Man convicted for killing wife's coworker, forcing her to behead him