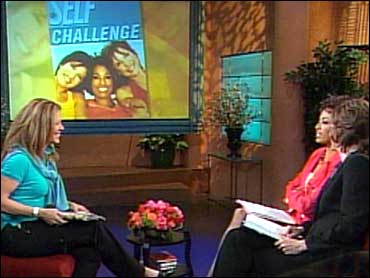 Self magazine challenged The Early Show's co-anchors Rene Syler, Julie Chen and Hannah Storm to participate in its annual "Self Challenge" - a three-month program designed to encourage Self readers of varying fitness levels to get healthy.

The Early Show kicked off this year's challenge a few weeks ago. Then, last month, Self magazine dropped by to see how the participants were keeping up their end of the bargain.

Lucy Danziger, Self's editor-in-chief, started this month's progress report by congratulating Rene, Julie and Hannah on how well they have been following the program, even making efforts to keep exercising during their vacations.

She went on to explain that the third month of the "Self Challenge" is about maintaining all the fitness gains they have made already. "You only have to do two cardio workouts," Danziger said. "In fact, we ask you to go out and have fun on weekends. The weather is nicer, and it's easier to be outside and have fun. That counts as the third workout."

As for nutrition, the focus is on eating healthy and going to the fruit stand, the theory being "if you eat right, you're not going to have to count calories. You want protein and fibers and colors of the rainbow," as represented by the fruit stand. Focus on eating from all the food groups and filling up on the right things.

As for the fitness goals that were set, Julie reported that her stamina has vastly improved since she started working out on a treadmill and cycle. "I don't get as winded if I'm rushing and walking quickly somewhere, or taking the stairs and going upstairs in a building."

Hannah's goal was to increase the strength of her body's core, which had been weakened by child bearing. But after concentrating on some very challenging abdominal exercises, she finds that her body is much stronger, adding, "I used to notice I would have a sore back sometimes, and strengthening my core has alleviated that in a big way. That's important."

In working with fitness expert Alastair Greer, Hannah also learned to hold her shoulders down and back when lifting weights (instead of hunching up). She reported, "I had some neck issues, and he really took care of that. We also had a lot of fun. We did other things. I get bored working out, so we did boxing. It's like cardio but it's fun."

As for Rene, she said she had noticed, in working out with Alastair, that she has a tendency to bulk up a lot. "I was seeing a lot of bulk in my legs" so she changed her exercise routine.

But, most importantly, she added, "One of the things I want women to know: If you start doing something and don't like the results, you can change. I'm working on my core and upper body strength."

About 92,000 women already have signed up for the Self Challenge but it's not too late to get started. You can start today by visiting the Self magazine Web site.

Says Danziger, "You can start now and get in the best shape of your life by summer… And it should be fun... Working out shouldn't be punishment. It should be something we commit to for life."