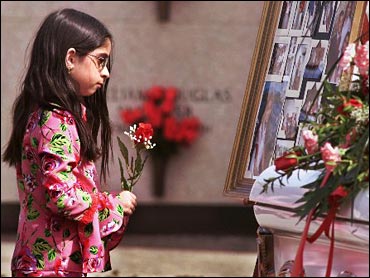 Jesica Santillan, the Mexican teenager who died last month after a bungled heart-lung transplant, was laid to rest in a rural North Carolina cemetery Tuesday as the ethical debate over her treatment continued to swirl.

The 17-year-old girl's small white coffin was slipped into a mausoleum wall and covered with a slab of pink granite as her parents watched. On a sunny, springlike day, some 100 mourners gathered at the small graveyard east of Louisburg for the outdoor service.

Plans to bury Jesica in Mexico were abandoned because there was no guarantee her illegal immigrant parents would be allowed to return to the United States afterward.

Critics have said American citizens should have priority for transplants. But transplant groups say it is only fair to give some organs to foreigners because they also donate organs to U.S. patients.

At the funeral, Nita Mahoney, whose husband started a charitable foundation in Jesica's name, seemed to hint at the controversy over whether the girl should have been on the long list of desperate transplant candidates.

"Love has no colors to it, and it crosses all rivers and nations," Mahoney said. "That was the only thing we wanted to do, was help a child. And in Jesica's memory, we will."

In an operation Feb. 7, Jesica was mistakenly given organs of the wrong blood type. Her body rejected the organs, and a matching transplant about two weeks later came too late to save her. She died Feb. 22 at Duke University Medical Center.

Some have questioned whether the second transplant was proper and whether the organs could have saved the life of another patient. Others questioned why an illegal immigrant received such high-intensity medical care.

"But if I was a person on the waiting list," Woodard told The News & Observer of Raleigh, "I'm sure the thought would run through my mind: Why were organs given to someone who was here illegally?"

Hospital officials said they have the discretion to put foreign citizens, including illegal immigrants, on the national waiting list for transplants. And the United Network for Organ Sharing, which oversees the distribution of organs nationwide, allows up to 5 percent of recipients to be from other countries.

"Part of the rationale is that it may be hypocritical to accept donors who are not U.S. citizens, but not allow them to be transplant recipients," said Joel Newman, UNOS spokesman.

A major factor in deciding who gets a transplant is ability to pay. The federal government pays for some emergency medical services, but does not cover illegal immigrants who were unable to pay.

Jesica was unusual among illegal immigrants in that she had health insurance, provided through her mother's job at Louisburg College. Family friend Mack Mahoney said the insurance will pay for 80 percent and a foundation he created to help the Santillans could cover the rest.

Lawyers for the girl's family say they haven't decided whether to sue the hospital.

"She came as close to being an angel on earth as anyone," attorney Frank Cassiano said. "This girl was brave every day of her life. Duke needs to be aware there's nothing I'm not going to do to paint this picture."