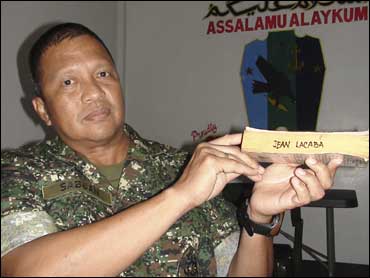 Militants holding three Red Cross workers threatened to behead one of the hostages if Philippines troops do not withdraw from the al Qaeda-linked group's southern stronghold, officials said Wednesday, but the military rejected the demand.

The latest threat was made by Abu Sayyaf commander Albader Parad to a government emissary on Jolo island, where the three International Committee of the Red Cross workers - two Europeans and a Filipino - have been held since Jan. 15, said Jolo Gov. Abdusakur Tan, who heads a task force dealing with the hostage crisis. The group said they would carry out the threat in a week.

The military said the Abu Sayyaf cannot be trusted and refused to honor the demand. The militants reneged on an earlier pledge to free a hostage last week after nearby troops complied with their initial demand to move back.

"We have eased the pressure for a short while, but they did not make good their promise to release one of the hostages," military chief Gen. Alexander Yano said. "We will not move further."

A government official who has been in touch with the Abu Sayyaf by phone told The Associated Press he was warned by Parad last Monday that one of the Red Cross workers would be beheaded after a week unless marines and government militiamen surrounding a militant stronghold near Jolo's Indanan township pull back farther.

The official spoke on condition of anonymity because he was not part of the task force dealing with the crisis.

Tan said a government emissary was separately told by the militants that the deadline for the troops to withdraw to Jolo town, near Indanan, is Tuesday. Tan said he will not give in to the demand, calling it "tantamount to surrendering" his predominantly Muslim province to "criminals."

Fears for the hostages' safety mounted after marine snipers last week fired at the militants trying to breach a loose military cordon, sparking two days of clashes that killed three marines and up to seven guerrillas.

The hostages were not harmed, but Parad later threatened to kill all of them if another clash erupted or if the military tried to rescue them.

"We're still keeping our eyes on the kidnappers. We have not moved back too far as to allow them to escape," military spokesman Lt. Col. Ernesto Torres said. "We have not changed our objectives - first to safely rescue the ICRC aid workers and secondly, to neutralize the kidnappers."

Aside from Parad, who has been blamed for past kidnappings and beheadings, marine officials believe government forces have surrounded other Abu Sayyaf commanders and Indonesian militants they have been hunting for years.

The Abu Sayyaf has about 400 gunmen and is on the U.S. list of terrorist groups for its links to al Qaeda and involvement in kidnappings, beheadings and deadly bomb attacks.