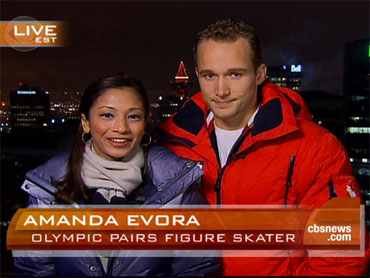 Monday night, it was China who took the gold during the Pairs Figure Skating Finals. But the two American teams turned in the best performances of their lives - Amanda Evora and Mark Ladwig placed tenth. Jeremy Barrett and Caydee Denney were thirteenth.

While Evora and Barrett are competitors on the ice, they're a couple off the ice.

"What was more nerve-wracking, skating your program or watching Jeremy skate his?" Rodriguez asked Evora.

"To tell you the truth, I was extremely nervous for Jeremy when his music went on, but when you skate for yourself, you have control over it. The nervousness kind of leaves. So it was really good to see when Jeremy was finished how happy his face was," she said.

"Like Amanda said, it's a little more nerve-racking watching somebody else than doing it yourself. But I was really pulling for her last night," he said.

Although it's not typical to compete against your girlfriend and then see her in the embraces of her partner, for Barrett it's no big deal.

"I was really excited for them - for us both last night to be warming up at the Olympic games. You can't ask for much more than that," he said.

It's been a fulfilling five years both on and off the ice for the couple, who've trained together for the Winter Olympics. Evora and Barrett are both 25 years old and hail from Bradenton, Fla.

"Amanda, sum up for me what it's like to have shared this Olympic experience with your boyfriend," Rodriguez asked.

"Gosh. Well, we're here for two weeks and this week before we were competing pretty much our priority was skating. And now that we're done, we'll be able to spend some more time together and really enjoy the games. So I am very excited about that," she said.

The couple postponed their Valentine's Day plans because they skated on Sunday, so the pressure is still on for Barrett.

"Well, I know we'll definitely be going out to eat. I didn't realize I was going to be under this much pressure for Valentine's Day, but now that we're done, we'll just going to enjoy our time here," he said.

Barrett's mother told reporters that she would like there to be "six rings at the Olympics this year" versus five - really turning up the pressure.

"Yeah, no kidding. No, we're just here having fun and I think there will be five rings at this one," Barrett joked.

"All right, well, keep us posted," Rodriguez said. "We want to see the ring eventually. I have no shame, I'm like your Mom, Jeremy!"