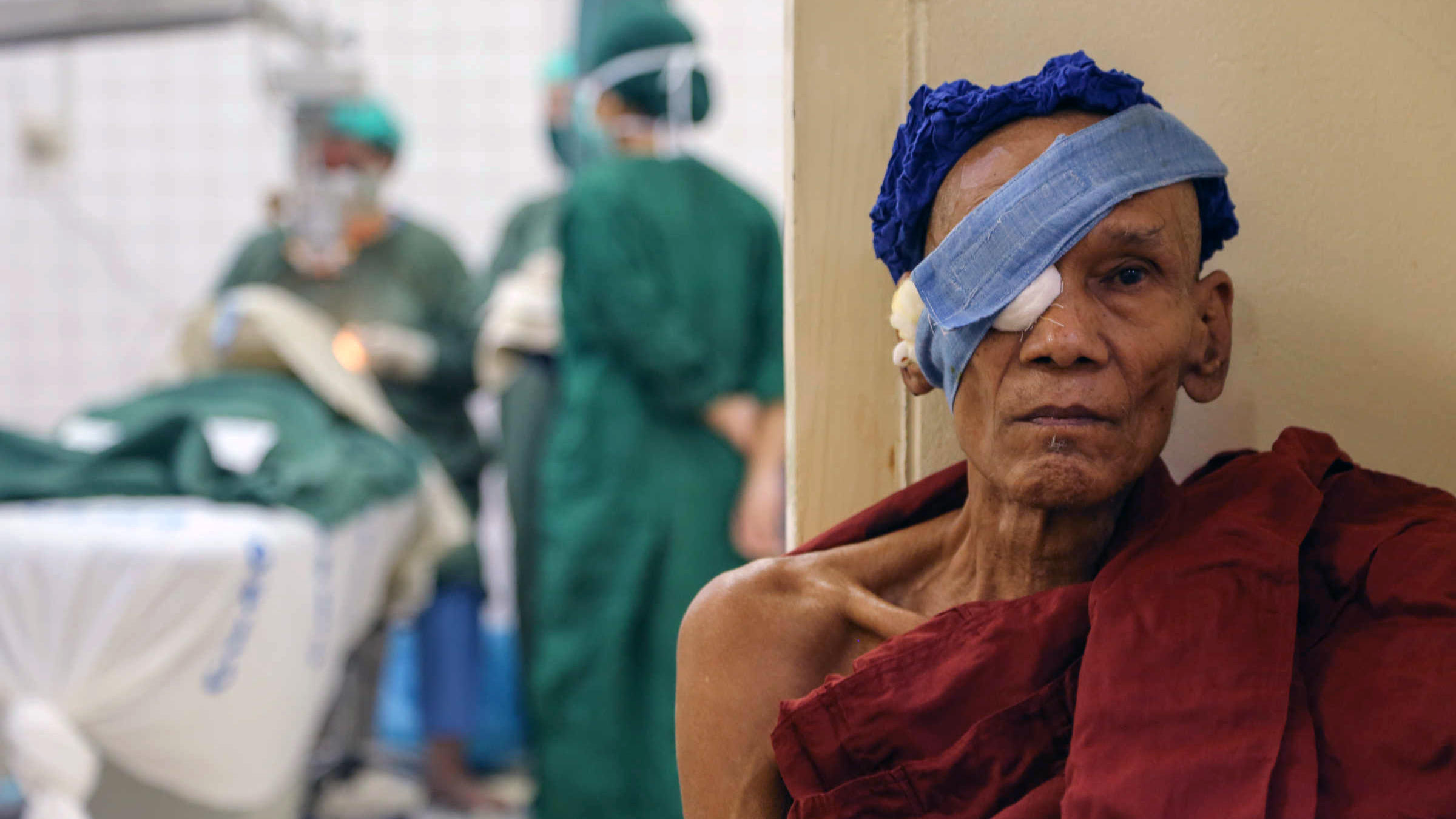 Blindness and partial blindness are not epidemic here in the U.S. but they are in certain parts of the world. Our story is about two doctors who decided to do something about it. And incredibly, to date, they've restored sight to more than 150,000 people. Doctors they've trained have restored sight to four million more.  As we first told you in April, their partnership seems improbable. One is a hard-charging, Ivy-League, American, adrenaline-junkie; the other a serene, Buddhist surgeon from the remote mountains of Nepal. We joined them on one of their most challenging missions -- in the isolated country of Burma. Their goal: to lead Burma out of darkness one patient at a time.

One by one the patches are peeled away and the world comes back into focus – you're witnessing the moment when the people in this room realize they can see for the first time in years.

Bill Whitaker: Can you see my fingers?

Their eyes and their faces begin to light up with a quiet sort of joy and wonder at the gift of sight.  As they look around, they see who changed their world, with an operation the day before that took just minutes. Doctors Geoff Tabin and Sanduk Ruit are eye surgeons.  And now, they are life savers. To hear Doctors Ruit and Tabin speak, they are the beneficiaries.

"I still get such a thrill when people don't expect or realize they're gonna have their sight restored." Dr. Geoff Tabin

Bill Whitaker: What's it like when that bandage is taken off and that person sees for the first time, sees you?

Sanduk Ruit: I may have seen it thousands of times, but every time, there's a new tickle there. And I feel like my battery's been recharged.

Geoffrey Tabin: I still get such a thrill when people don't expect or realize they're gonna have their sight restored. And then a transformation when they see, and the sort of moment of hesitation, what are they seeing, and then the smile.

U Myint Oo hadn't seen for two years, until this moment. Others here had been blind for decades. They all had cataracts – a milky, white build-up of protein that clouds the lens of the eye.  In the U.S. they mainly afflict the elderly; removing them – a routine operation. But here in Burma, also known as Myanmar, cataracts go untreated and blindness is a way of life.

Geoffrey Tabin: It's a Buddhist population, they're very fatalistic. They're very accepting. And there's almost an acceptance that you get old, your hair turns white, your eye turns white and then you die. And the idea that you can actually have your sight restored has not really permeated all levels of Myanmar society.

Bill Whitaker: What does that tell you about the state of eye care here?

Geoffrey Tabin: Well, it's a place we can make a difference.

Burma is one of the poorest countries in Asia, slowly emerging from the darkness of decades of dictatorship. After years of trying, Tabin and Ruit finally were permitted to bring their treatment here. We met them in Taunggyi – in central Burma, where the lack of care has led to some of the highest rates of cataracts in the world. Through radio and pamphlets and conversation, word of the doctors visit spread.

Hundreds of Burmese who'd lost their sight found their way to Taunggyi's hospital – with the help of care givers – many trekking for days.  Here, cataracts are not just a malady of old age; they take the sight of the very young too, caused by infections and malnutrition.

By the time the doctors scrubbed in, the corridors were choked with people hoping to have their sight restored.

Bill Whitaker: Is it ever daunting? I mean, you look out there and you see that line of people, all who need this surgery.

Geoffrey Tabin: It's daunting on a worldwide basis. It may be a long line but this individual person I'm gonna give the very best care I can.

Dr. Ruit set a rapid pace. He repaired an eye; the patient got up; the next patient was ready on an adjoining table. Just minutes an eye, then onto the next.  Dr. Tabin performed the delicate surgery just feet away.

Geoffrey Tabin: Want to take a look. See how nice and clear that is. I don't know what that was - maybe 4-5 minutes. And it's going from total blindness to great vision.

They kept up this pace until 7:00 in the evening.

Bill Whitaker: It's almost like an assembly line. But assembly line sounds too mechanical. I mean, this is people's eyes.

Geoffrey Tabin: It's people's lives. You know, once someone goes blind in a developing world, their life expectancy is about one-third that of age and health matched peers. And for a blind child, the life expectancy is five years.  And also in the developing world, it takes, often, a person out of the work force, or a child out of school, to care for the blind person. So when we restore sight to a blind person, we're freeing up their family and restoring their life.

Among the throng waiting to have their lives restored we found Kancchi. Her son, a farmer, had been her eyes and devoted caretaker since cataracts took her sight. 15-year old Yawnu had been blind since age seven. He was overwhelmed, but grateful.

Thank you, he said. Doctors Ruit and Tabin heard that a lot.  In four days in Taunggyi, with the help of local doctors they were training, they performed 503 cataract surgeries. Her eyes now bandaged, Kancchi waited with her son.

Bill Whitaker: You are going to be performing as many cataract surgeries as the hospital does normally in a year.

Sanduk Ruit: we are basically here to ignite fire. Ignite fire of the possibility of doing high quality, high volume cataract surgery. It is still possible.

Bill Whitaker: You want to ignite a fire here.

As long as he can remember, Sanduk Ruit has been burning to change the world around him.  He grew up desperately poor, in this village with no electricity or running water, high in the Himalayas of Nepal.

The nearest school was a 15-day walk away. Ruit's illiterate parents saw education as the way out for their children, but the grip of poverty and poor health was too strong to escape.  His younger sister, with whom he was very close, died of tuberculosis.

Sanduk Ruit:  I saw her pass away in front of me. And then it was a very strong determination from inside that maybe this is the profession that I should take and make healthcare available for my countrymen.

That determination took him to medical school in India.  He came back to Nepal an eye doctor, committed to bringing modern care to remote mountain villages. The documentary "Out of the Darkness" showed them carrying equipment on their backs. His team hiked for days. His goal – as revolutionary as it was simple: to cure blindness in the Third World with a quick, cheap technique to remove cataracts.  Soon the medical world took notice … and so did a young Geoff Tabin.

Geoffrey Tabin:  I imposed myself on Sanduk and came to work in Nepal.

Bill Whitaker: What did you think of him when he first showed up?

It was like being hit by a human avalanche – fitting since Geoff Tabin's passion was mountaineering more than medicine. He'd raced through Yale, Oxford and Harvard medical school. But he had made his name as one of the first people to climb the highest peak on every continent. He met Dr. Ruit and thought he'd found his next challenge. Ruit was skeptical this frenetic young man had the same dedication to ophthalmology he had to adventure.

Sanduk Ruit: I sent him to an-- to a hospital in eastern part of Nepal in the middle of summer. And I said, "He's not gonna survive there."

Geoffrey Tabin: During the summer, in the monsoon, it's quite oppressive. It's sort of 100°, 105°, with a 99 percent humidity, and lots of mosquitoes.

Bill Whitaker: Wait a minute. You sent him to-- a difficult place on purpose--

Bill Whitaker: Did you know that—he was testing you?

Geoffrey Tabin: No. I thought he sent me there because there was so much need. I scratched my mosquito bites and was excited to go to work that there were all of these blind people that, you know, I could make a difference in their life.

Bill Whitaker: He won you over?

Their relationship has grown from teacher – student to collaborators and friends.  Like yin and yang, these opposites complement each other. They created the Himalayan Cataract Project, started here at Tilganga, Ruit's hospital in Kathmandu. They perfected the procedure called small incision cataract surgery: just one small splice – the cataract comes out, a new man-made lens goes in, no stitches required. It's quick and costs about $20.

Geoffrey Tabin: For these advanced cataracts, I'm performing the same quality of surgery that I would be doing in America.

Dr. Tabin spent most of his year at the University of Utah where cataract surgery costs a couple thousand dollars an eye. He might do four or five a day. Here, he does that many in a half hour, removing cataracts he'd never see in the U.S., because they'd never go untreated so long.

Their project is funded by donations and grants. They're able to keep costs down because they don't use expensive equipment – and they make their own lenses at their factory in Nepal. The lenses are crucial to the process – they're a permanent implant.   Each costs about four dollars.  In the U.S., because of strict, safety requirements, they can cost 50-times more.

Sanduk Ruit: Very comparable. I'd put that in my mother's eyes.

So far they've operated in two dozen countries, including North Korea, Ethiopia and now Burma. They've brought hundreds of doctors, including the Burmese doctors working with them, to Tilganga for training. And everywhere they go, they train other doctors to carry on their work once they've moved on.

Sanduk Ruit: How many fingers?

We saw the immediate benefit the morning after surgery.

The patients gathered in a Buddhist monastery. As the bandages came off, first wonder; then smiles and celebration. Remember U Myint Oo, blind for two years? His family sent us this picture.  He can read again, his favorite pastime.

Fifteen-year-old Yawnu, blind half his life, seemed somewhat bewildered by this new world of sight.

For Kancchi the wait was over. Her son was overcome when she saw his face for the first time in years.

Then there was this woman.

Bill Whitaker: Is this the first time she's been able to see in months?

She called Doctors Ruit And Tabin gods. They assured her they are not.  But in this room it certainly seemed they had performed miracles.

The doctors recently got more good news. The Himalayan Cataract Project is one of eight semifinalists for a $100 million grant from the MacArthur Foundation.

For more information on The Himalyan Cataract Project, visit their website or call 888-287-8530.

Inside Lalibela, the mysterious holy site
Thanks for reading CBS NEWS.
Create your free account or log in
for more features.
View CBS News In
CBS News App Open
Chrome Safari Continue
Be the first to know
Get browser notifications for breaking news, live events, and exclusive reporting.