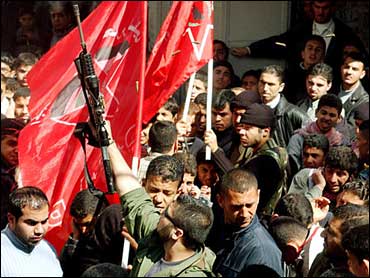 Palestinian militants fired a series of small rockets at an Israeli town Wednesday, hours after Israeli troops carried out a major incursion directed at the metal workshops producing the weapons.

The Palestinian attack prompted further action by the Israelis, who moved to block the main north-south road in Gaza in two places, effectively cutting the coastal territory into three pieces.

Overall, 11 Palestinians were killed in Gaza and three died in the West Bank on Wednesday, with both sides warning that additional confrontations appeared likely.

Israeli troops and Palestinian militants have clashed in Gaza throughout the 29 months of Mideast fighting. But the confrontations have intensified since the militant Islamic group Hamas carried out a bomb attack that killed four Israeli soldiers last weekend.

Gerald Steinberg, an Israeli political analyst, said Israel was trying to weaken Hamas in advance of any possible cease-fire agreement. "What the Israeli military is trying to do is to remove as much of that (Hamas) capability as possible before a cease-fire," he said.

Ghassan Khatib, a Palestinian Cabinet minister, accused Israel of seeking to ratchet up the conflict. "The Israelis are attempting to escalate and increase the level of violence at a time we notice a serious reduction of the Palestinian violence in the past two months," he said.

In an incursion that began late Tuesday, Israeli tanks and soldiers battled Palestinian militants and security forces throughout the streets of Gaza City into the early hours of Wednesday. Eleven Palestinians were killed, seven of them militants or Palestinian security personnel, and four of them civilians, Palestinian hospital officials said. Another 25 were wounded.

The Israelis targeted Palestinian metal workshops that make mortars and rockets, which Hamas militants fire at Israelis, the army said. Israeli troops also destroyed several homes and damaged a school. Electricity was cut to much of Gaza City. The Israeli forces withdrew before dawn, about six hours after some 40 tanks charged into the city's Shajaiyeh neighborhood.

In the past some Gazans had objected to the use of the rockets, which almost always provoke a strong Israeli response. However, in this case Khatib blamed the Israeli incursion for causing the rocket fire.

Hamas founder Sheik Ahmed Yassin said Hamas had refrained from using rockets for a while but would now return to using all available weapons.

"Some people here think that the more we raise the white flag, the enemy will stop its aggression - but the more we give up, the more aggression we get. We have no other way but to defend and resist by using all means of resistance," he told Associated Press
Television News. He said Israel had "lost its mind."

Israeli Defense Minister Shaul Mofaz said that after the rocket attack, "we will continue to operate in the Gaza Strip ... in the framework of our overall policy of fighting Hamas."

One died and four were injured when a small bomb inside the car exploded as they were traveling in the town of Jenin, Palestinian security sources said. The Al Aqsa Martyrs Brigades, the Palestinian militia to which the men belonged, claimed Israel was responsible for the blast.

Two Palestinians were shot to death by Israeli troops conducting house-to-house searches in the Old City in Nablus. Palestinians said one was a 32-year-old baker headed to work, and the other was a 16-year-old who was among a group of stone throwers. The Israeli army said the older man was shot after he refused to halt when ordered to do so, and the teenager was shot after throwing a firebomb at Israeli forces.

Israel is calling on the U.S. to apply the same standard to the Palestinians as it does to Iraq, as it prepares for a possible U.S. invasion of Iraq.

"What applies in Iraq, that a brutal, terroristic dictatorship should be removed and democratization should be introduced, what applies there should apply in the Palestinian dictatorship as well," said Foreign Minister Benjamin Netanyahu.

Meanwhile, the entire Israeli public has received gas masks from the government, should Saddam Hussein launch a counterstrike at Israel in response to a U.S. attack on Iraq, reports CBS News Correspondent Robert Berger.

But what about the Palestinians?

The Israeli supreme court has rejected a petition by human rights activists, who demanded that Israel supply gas masks to the Palestinians.

"Israeli tanks sit in every Palestinian town, city, village, and they're all under Israeli control, and therefore Israel has responsibilities," said Shabtai Gold, a member of Doctors For Human Rights.