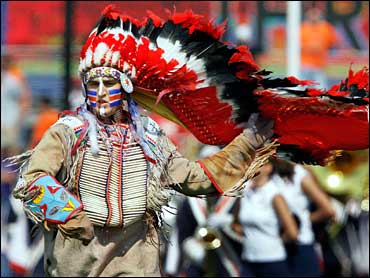 The NCAA in 2005 deemed Illiniwek — portrayed by buckskin-clad students who dance at home football and basketball games and other athletic events — to be an offensive use of American Indian imagery and barred the university from hosting postseason events.

American Indian groups and others have complained for years that the mascot, used since 1926, is demeaning. Supporters of the mascot say it honors the contributions of American Indians to Illinois.

Illinois still will be able to use the name Illini because it's short for Illinois and the school can use the term Fighting Illini, because it's considered a reference to the team's competitive spirit, school officials said. It is unclear if the school will get a new mascot.

"The Chief Illiniwek tradition inspired and thrilled members of the University of Illinois community for 80 years," Board of Trustees Chairman Lawrence Eppley said in a statement. "It was created, carried on and enjoyed by people with great respect for tradition, and we appreciate their dedication and commitment. It will be important now to ensure the accurate recounting and safekeeping of the tradition as an integral part of the history of the university."

The university received a letter from the NCAA dated Thursday that said the school will no longer be banned from hosting postseason events if it ends use of the mascot and related American-Indian imagery.

The NCAA's sanctions thus far have prevented Illinois from hosting only two postseason events, both in low-profile sports.

Athletic director Ron Guenther said he was disappointed in the decision, but that the NCAA's sanction hurt the school's athletes and coaches.

"This is an extremely emotional day for people on both sides of the issue, but the decision announced today ends a two-decade long struggle surrounding Chief Illiniwek on this campus ... ," Guenther said. "Personally, as an alumnus and former athlete, I am disappointed, however, as an administrator, I understand the decision that had to be made."

"While I understand many people have strong feelings about this 80-year-old tradition, for the good of our student-athletes and our university it is time to come together and move on to the next chapter in the history of this distinguished institution," he said.

Basketball coach Bruce Weber said he, too, was disappointed, calling Chief Illiniwek a "tremendous tradition." But Weber also said he understood why the decision was made, pointing out that the NCAA barred the men's tennis team from hosting the first and second rounds of the NCAA tournament last May.

"They (the board of trustees) had to make the decision. It's disappointing," he said.

On Friday, a Champaign County Circuit Court judge rejected two students' request for a court order to ban the university from "capitulating to the NCAA by announcing the retirement of Chief Illiniwek."

The NCAA has said it believes its sanctions are legal.

A state district judge in North Dakota in November granted a preliminary injunction in a similar lawsuit filed over the University of North Dakota's Fighting Sioux nickname and use of American Indian imagery.

In the lawsuit, the students also argued that by imposing sanctions, the NCAA failed to provide due process to the students and the university.