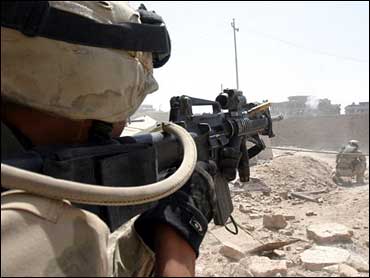 Militants loyal to radical Shiite cleric Muqtada al-Sadr kept their hold on a revered shrine, and clashes flared in Najaf on Saturday, raising fears that a resolution to the crisis in the holy city could collapse amid bickering between Shiite leaders.

An unofficial mediator pleaded with al-Sadr to disarm his militants, pull them out of the shrine and disband his militia immediately. "We are in a race with time," said Hussein al-Sadr, a distant relative of the cleric.

Clashes between U.S. troops and al-Sadr fighters were brief but heavy, punctuated by gunfire and explosions, with one blast hitting the street 50 yards from the Imam Ali Shrine at the center of the standoff.

The fighting died down after about 45 minutes, returning the city to the relative calm that it has seen.

Still, the flare-up reflected the danger that peace efforts could fall apart once again, mired in last-minute delays. Al-Sadr's Mahdi Army militia still held the Imam Ali Shrine, their stronghold throughout this month's fighting, and while it has agreed to hand it over to Shiite religious authorities, the two sides were arguing over how to do so.

Elsewhere, attackers fired a rocket-propelled grenade at a U.S. military vehicle in the Iraqi capital early Saturday, killing one U.S. soldier and wounding two others, the military said in a statement. As of Friday, 949 U.S. service members have died since the beginning of military operations in Iraq in March 2003, according to the U.S. Defense Department.