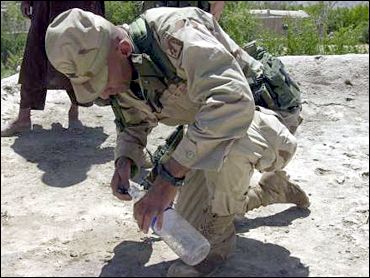 The women in Col. Kassem Saleh's life say he had an amazing gift of words.

"He made us feel like goddesses, fairy princesses, Cinderellas," said Sarah, in Maine. "We had all found our Superman, our knight in shining armor."

"A lot of very romantic, very flowery language," said Vicki, in Tampa, on the CBS News Early Show. "He always talked about wanting to be with me forever, that I was a wonderful woman."

Then the four dozen or so women to whom he allegedly proposed compared notes.

"He copied and pasted a lot of our things to other women. These weren't his words," said Debbie, the Detroit fiancée who figured out the alleged scam. While waiting for Saleh to return from duty in Afghanistan, she did a search on his name on the Internet, and found a story about another fiancée waiting for his return.

"Shock. Disbelief. I felt betrayed. I felt that I should have been smarter. There was embarrassment for a lot of the women," she said on The Early Show. "All of us were hurt, ashamed and embarrassed. It was real difficult."

Most of the 50 women wish to remain anonymous; Debbie and Vicki asked that only their first names be used.

Army commanders said Wednesday they are investigating allegations that the colonel proposed to dozens of women in the United States and Canada after meeting them through Internet dating services.

According to The New York Times, most of the women had posted messages on a site called tallpersonals.com, which specializes in taller-than-average singles. The women said Saleh claimed in his e-mail messages to be 6-3 or 6-5, but some who have met him say he is 5-9 or 5-10, The Times said.

"There was a difference between the illusion he created on the Internet and the man that I saw," she said. "Earlier in our relationship it was a closer match. As time went on, it got to be less so."

"The commanders are aware of it, and they are currently investigating the alleged incidents," he said.

They have formed a group called, Amazon Army, and plan to pursue some type of class action suit.

One victim said some of the women had received engagement rings and planned weddings. She had shopped for a wedding dress.

His fiancées want him punished but it's not clear that such behavior would violate either criminal law or military regulations.

His attorney issued a statement saying the matter had nothing to do with Saleh's military career, and should not be allowed to destroy his career.

"My interest in being here is really to protect other women from having this happen to them," said Vicki. "If he's allowed to continue to do this, how many other lives will be hurt?"