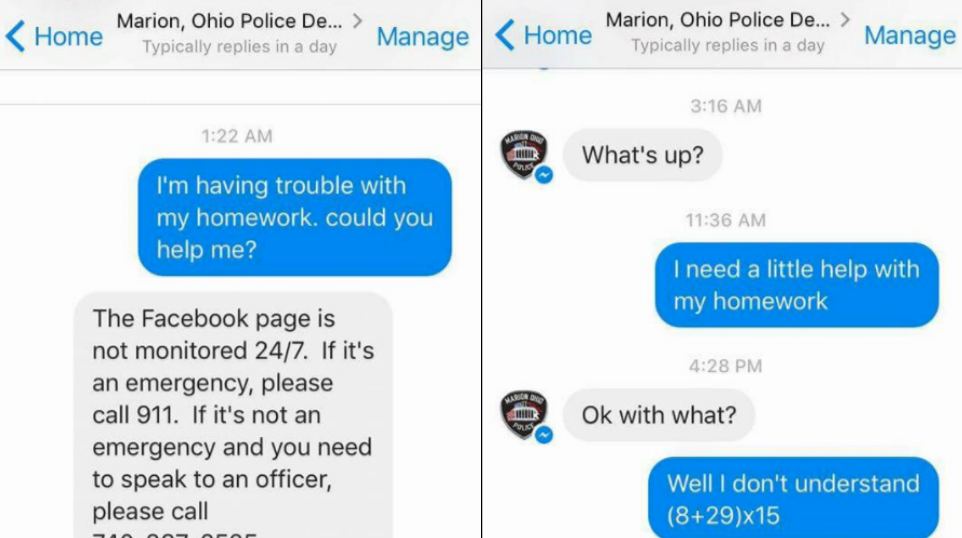 When Molly Draper found out her 10-year-old daughter, Lena, messaged the local police department on Facebook requesting help with her math homework, she couldn’t believe it.

Not only that: they actually responded.

Lena sent a message to the Marion, Ohio, Police Department’s Facebook page last week, explaining that she was having trouble with her fifth-grade math assignment.

Instead of turning her away, Draper says Marion Police Dept. Lt. B.J. Gruber, the officer who runs the page, simply responded, “Ok with what?”

“Do the numbers in the parenthesis first so in essence it would be 37 x 15,” the officer responded.

“I was happy, but not surprised that they responded so quickly,” Draper told CBS News. “They are wonderful with their communication with the community.”

Afterward, Draper posted screenshots of their exchange on Facebook, and the post went viral with more than 2,100 shares.

Unfortunately, as some Facebook users pointed out, some the officer’s guidance turned out to be incorrect.

But Gruber is hoping people will give him an “A” for effort.

“Hoping it is truly the thought that counts since apparently I cannot!” he joked. “Especially since the answer was wrong, it was very nice for Molly to acknowledge our attempt to help her daughter with some math homework.”

Draper said she had a fun Facebook exchange with the police last summer, which is how her daughter came up with the idea to reach out to the department for homework help.

“She told me just after she did it, and I didn’t believe it until I saw it,” Draper said.

That may have been the first time her daughter was in touch with the officer, but it won’t be the last.

“Tomorrow he’ll be joining my daughter for lunch at school, and is bringing her an autographed shirt to commemorate their going viral,” Draper said. “I am surprised, I thought it was just a goofy life moment to share with some friends, but it seems to really be striking a chord with people.”