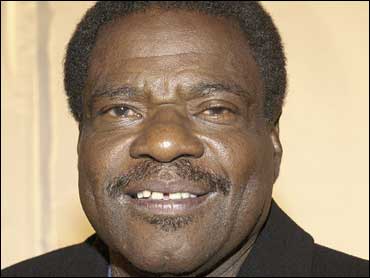 Billy Preston, the exuberant keyboardist who landed dream gigs with the Beatles and the Rolling Stones and enjoyed his own series of hit singles, including "Outta Space" and "Nothing From Nothing," died Tuesday at 59.

Preston's longtime manager, Joyce Moore, said Preston had been in a coma since November in a care facility and was taken to a hospital in Scottsdale Saturday after his condition deteriorated.

Moore told CBSNews.com that after the coma, Preston "never really was able to recover, though he sure tried."

Preston had battled chronic kidney failure, and he received a kidney transplant in 2002. But the kidney failed and he has been on dialysis ever since, Moore said earlier this year.

"(Billy) has left behind a legion of fans and friends who will miss him terribly but who also know that he is free, at peace and back in the arms of the Lord who'd gifted him with his massive and amazing talents, abilities, heart and soul," Moore said.

Known for his big smile and towering Afro, Preston was a teen prodigy on the piano and organ, and lent his gospel-tinged touch to classics such as the Beatles' "Get Back" and the Stones' "Can't You Hear Me Knocking?"

He broke out as a solo artist in the 1970s, winning a best instrumental Grammy in 1973 for "Outta Space," and scoring other hits with "Will It Go 'Round In Circles," "Nothing From Nothing" and "With You I'm Born Again," a duet with Syreeta Wright.

He also wrote Joe Cocker's weeper, "You Are So Beautiful," and co-wrote with Quincy Jones the score for 1970 movie "They Call Me Mr. Tibbs." Other achievements included being a musical guest on the 1975 debut of "Saturday Night Live," and having a song named after him by Miles Davis. Among his film credits: "Blues Brothers 2000" and "Sgt. Pepper's Lonely Hearts Club Band."

Preston's partnership with the Beatles began in early 1969 when friend George Harrison recruited him to play on "Let It Be," a back-to-basics film and record project that nearly broke down because of feuding among band members. Harrison himself quit at one point, walking out on camera after arguing with Paul McCartney.

Preston not only inspired the Beatles to get along — Harrison likened his effect to a feuding family staying on its best behavior in front of a guest — but contributed a light, bluesy solo to "Get Back," performing the song with the band on its legendary "roof top" concert, the last time the Beatles played live. He was one of many sometimes labeled "The Fifth Beatle."

Preston remained close to Harrison and performed at Harrison's all-star charity event, "The Concert for Bangladesh" and at the "Concert for George," a tribute to Harrison, who died of cancer in 2001. He played on solo records by Harrison, Ringo Starr and John Lennon.

Preston also toured and recorded extensively with the Rolling Stones, playing on such classic albums as "Sticky Fingers" and "Exile on Main Street." In the mid-'70s, he parted from the Stones, reportedly unhappy over not getting proper credit for "Melody" and other songs. He reunited with the band in 1997 on its "Bridges to Babylon" record.

His sessions credits included Aretha Franklin's "Young, Gifted and Black," Bob Dylan's "Blood on the Tracks" and Sly and Family Stone's "There's a Riot Goin' On," three of the most acclaimed albums of the past 35 years.

The Houston native earned his performance chops at age 10 playing the keyboard for gospel singer Mahalia Jackson, and at 12 portraying a young W. C. Handy in the 1958 biopic "St. Louis Blues." He toured with mentors and fellow piano greats Ray Charles and Little Richard in the early 1960s, first encountering the Beatles while on the road in Germany.

Preston had numerous personal troubles in recent years. In 1992, he was given a suspended jail sentence, but ordered incarcerated for nine months at a drug rehabilitation center for his no-contest pleas to cocaine and assault charges. Five years later, he was sentenced to three years in prison for violating probation. In 1998, he pleaded guilty to insurance fraud and agreed to testify against other defendants in an alleged scam that netted about $1 million.