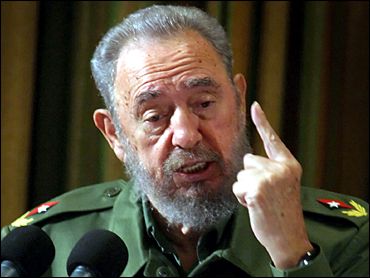 Unlike his arch enemy, President Bush, Cuban leader Fidel Castro is known for his nocturnal work habits. So it is not hard to imagine that Castro stayed awake late Sunday awaiting the results of the recall referendum that would determine the fate of his friend and ally, Hugo Chávez.

Although President Castro has not yet commented on the referendum results, he announced last week that he was postponing the celebration of his 78th birthday for two days, because he wanted it to coincide with Chávez 's election "triumph."

The outcome of the referendum, touted on Cuban TV as "proof of Venezuelan democracy", was an object of great interest to many Cubans for several reasons—not the least being that Cuba imports 53,000 barrels daily of Venezuelan crude oil and derivatives.

That's nearly half of all the oil consumed by the country. Under a special deal signed in 2000, Cuba gets practically all that oil on preferential terms. Part of the cost is paid with the services of thousands of Cuban professionals ranging from doctors to athletes.

The importance of this cannot be underestimated. The collapse of the Soviet Union cost Cuba 255,000 barrels of crude daily on preferential terms. Over the past ten years, Cuba's oil and gas production has risen from under 20,000 barrels per day to some 75,000 barrels, but that meets only half of the island's needs.

However, when asked why Chávez's survival was important to Cuba, Prof. Carlos Alzugaray put it in broader terms. "First of all, because it's one of the political processes taking place in Latin American and the Caribbean that really represent an effort to break away from prevailing neo-liberal policies in order to benefit the people of Venezuela and not the multinational corporations".

Alzugaray who is coordinator of International Strategic Studies at Havana's graduate school of International Relations, says, "In a certain sense this is a vindication of the Cuban way, and by that I do not want to imply in the least that the Venezuelan process is an exact replica of the Cuban one, because it is not. As a matter of fact this is one of the fallacious arguments of the opposition."

It was precisely the fear that Chávez was turning his oil-producing country into a carbon copy of Castro's Cuba that convinced many affluent Venezuelans to cast their votes for his ouster. And in South Florida, Venezuelan exiles opposing their left-leaning President received many statements of moral support from anti-Castro Cuban exile groups. Those Cubans were preparing to welcome a Chávez defeat as a blow to Castro.

Miami, reportedly, had the largest polling place outside and even inside of Venezuela. More than 15,000 Venezuelans living in Florida or nearby states were expected to cast ballots there.

Like the Cuban exiles, the Venezuelan community is split along economic and ideological lines. The son of a former Venezuelan President and leader of the Democratic Coordinator Group organized the anti- Chávez campaign and voter-registration drive prior to Sunday's referendum. Chávez supporters in South Florida organized groups dubbed Bolivarian Circles for the 19th century Venezuelan liberator Simon Bolivar. Chávez refers to his style of government as a "Bolivarian Revolution".

Events in Venezuela are always given extensive coverage in the state-controlled Cuban press. Cuban TV played a key role in getting out accurate information during the 2002 attempted coup. It was able to contact Chávez's daughter by telephone and broadcast live her description of the President's kidnapping and her insistence that he hadn't resigned as claimed by the opposition.

Now the referendum is the top story on Cuban TV and radio, overshadowing even reports on the clean-up of damage from Hurricane Charley. On Sunday, there was live coverage of several hundred Venezuelans voting at the Venezuelan Embassy in Havana. Predictably, most of them—students or patients receiving medical attention in Cuba—said they were voting for Chávez because thanks to him they have access to health care and higher education. This evening Cuban TV viewers will be treated to a two-hour special round table on the results of the referendum.