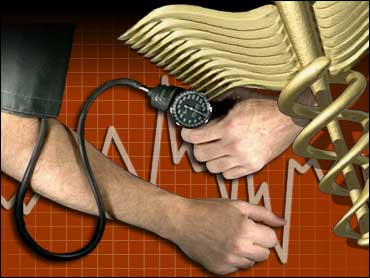 Bulking up on fiber may help people keep their blood pressure under control, a new study shows.

Researchers tallied the results of 25 studies on the effects of dietary fiber on blood pressure and found that a high-fiber diet was associated with a significant reduction in blood pressure levels among people with high blood pressure or hypertension.

Although other dietary changes have been suggested for blood pressure control, researchers say there hasn't been enough evidence to recommend their use to the public.

"We performed a comprehensive analysis of data from 25 clinical trials and all the data pointed to one strong conclusion — adding fiber to a person's diet has a healthy effect on their blood pressure," says researcher Seamus Whelton, a medical student at the Tulane University School of Medicine, in a news release. "Analyzing a large number of studies lends strength to the conclusions of clinical trials that involved too few participants to show an effect of dietary fiber on blood pressure."

In the study, which appears in the March issue of the Journal of Hypertension, researchers evaluated the results of 25 studies on the effects on blood pressure of adding fiber to the diet. Fiber intake in the studies ranged from 3.8 grams per day to125 grams per day.

The type of fiber added to the diet in the studies included fruit, cereal, fiber pills, and vegetables.

In studies lasting at least eight weeks, the average reduction in blood pressure was 3.12 mmHg systolic and 2.57 mmHg diastolic.

"Our results suggest that increased dietary fiber consumption may provide a safe and acceptable means to reduce blood pressure in patients with hypertension," write Whelton and colleagues. "Increased intake of fruits and vegetables may provide the best means to supplement dietary fiber intake because of its potential beneficial health effects."