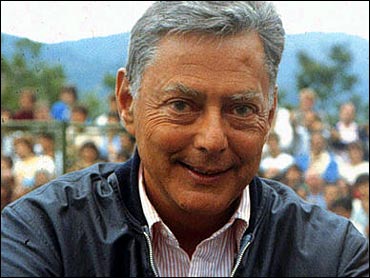 Fiat Chairman Umberto Agnelli, who helped lead his family's vast automaker out of hard times and into better financial shape, has died of cancer.

He died late Thursday, Fiat spokesman Raffaello Porro said. The Turin-based company acknowledged last month that Agnelli was undergoing treatment for cancer but his health appeared to have taken a sudden turn for the worse.

Agnelli, who was long sidelined in his family's auto empire, got his chance to take over after his elder brother Giovanni "Gianni" Agnelli died in January 2003. That death came after a dramatic decline in the company, whose stock price and market share had plummeted.

In February, Umberto Agnelli spoke with delight about the company's improved financial results of late. "What gives us a certain satisfaction is that, despite significant losses, we can still see notable improvements in the fourth quarter due to the work that's been done," he said then.

However, at a shareholders' meeting three weeks ago, Agnelli was absent - highly unusual for top Fiat brass and a hint that his health was suffering.

In Turin, the northern city where Fiat has long been the main industry, the news arrived on a grim foggy morning and set the place abuzz. Many worried about the fate of the city's major employer.

"This is the end," cafe owner Lucio Manfrinato said morosely. "You've got to be obsessed with automobiles to carry forward a car company, and these people had the obsession of making cars. Their heirs are young men in their 30s, and I wonder if they will have the fire in their belly."

At a newsstand, locals clamored for accounts of what happened. "In relation to his brother, he lived in his shadow," said newsagent Giuseppe Proveri. "All I can think of are these two rich widows, who were left by the two Agnelli brothers."

The market reaction was not yet clear early Friday. Some experts argued that Fiat stock would not be affected too heavily since traders had long calculated for the passing of the last members of the company's old guard.

Born in 1934, Umberto Agnelli was the youngest of seven children born into a growing automobile empire. As the decades unfolded, the family was to be both glamorous and tragedy-stricken, drawing frequent comparisons to the Kennedys in the United States.

Umberto Agnelli suffered grief early: His father died when he was 1, his mother when he was 11. Umberto's older brother, Giovanni, increasingly took a frontseat at Fiat.

Giovanni Agnelli's stylish, jet-setting playboy lifestyle set trends and arguably made him the most-imitated man in the nation. He also outshone the younger Umberto, who always was a more retiring character.

Umberto studied law and occupied his free time with the family's soccer club, Juventus, which is Italy's most successful team. At age 22, he was named chairman of the team and was tied to it until his death.

He took major roles in Fiat itself over the years, but nonetheless remained in his elder brother's shadow. Briefly, he ventured out of the family dynasty, serving as a Christian Democrat senator from 1976-79.

But further misfortune lay ahead, most tragically when Umberto's son, Giovannino, died in 1997 of a rare cancer. The young man, who passed away at 33, had been groomed to take over Fiat.

Already in the 1990s, Fiat's slide had begun, with less help from the government and tough competition from international automakers. In 2000, Fiat struck a deal with General Motors Corp., selling 20 percent of its auto operations to the Detroit-based automaker with an option to sell the remaining share by 2005.

In January 2003, when Giovanni Agnelli died, the family met immediately and named Umberto to take over, as Fiat faced its gravest crisis since its founding in 1899. By the previous year, the share price of Fiat's auto unit had lost about 80 percent of its value since a high in 1998.

Many speculated that Umberto would be more willing to relinquish the automaker, to finally move the Agnellis out of the auto business. They were wrong.

Instead, he helped consolidate operations, focusing above all on the auto business. That appeared to bring some improvements in the company's financial health, although even Fiat executives acknowledge there is a long way to go.

It was unclear who in the family might take over the reins of the company now, or if indeed that position would be held by an Agnelli at all. Two of Giovanni Agnelli's grandsons have been groomed for future roles, but many believe they are still too young.

Umberto's wife, Allegra, as well as his children Andrea and Anna, were with Umberto when he died in their home just outside Turin, the Apcom news agency said. Allegra Agnelli is also the cousin of Giovanni Agnelli's widow, Marella.

Umberto Angelli's body will lay in state Saturday at Fiat's headquarters in Turin before a private funeral that evening, Apcom said.