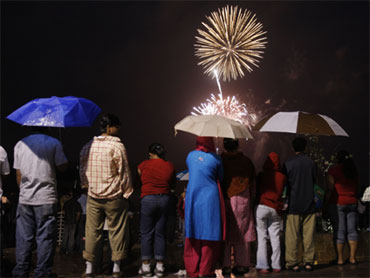 For many cash-strapped cities, this year's Fourth of July will be notoriously quiet, as more and more communities are pulling the plug on their fireworks shows.

The holiday celebration that is a sacrosanct tradition for many is also an expensive luxury at a time when city budgets are slashed to the bone.

The Miami-Dade Park and Recreation Department canceled this year's annual Amelia Earhart Park Fourth of July Concert and Fireworks celebration because of a lack of money from sponsors.

George Parrado, assistant director of recreation for Miami-Dade Parks, said it was difficult to secure sponsors in the current economic climate. He also said the event may be endanger again in 2010 if enough sponsors can't be secured to defray the cost.

Flint, Mich., cancelled its show, saying it doesn't have the funds to cover the fireworks — or the required overtime for public safety officers.

Colorado Springs canceled its fireworks display, which usually costs between $80,000 and $100,000.

The city of Yonkers, N.Y., canceled its show. Mayor Phil Amicone said that Yonkers would have to spend $100,000 in police overtime to put on the show.

The City Council of Montebello, Calif., a suburb of Los Angeles, voted to donate the $39,000 wireworks budget to local food banks.

"The last food bank line I saw had more than 1,000 people in it," Mayor Rosemarie Vasquez rtold the Los Angeles Times. "We figured that, instead of burning the money in the air, why not give it to people who need it."

For some communities, a pyrotechnic display can equal lost jobs. The mayor of Lowell, Mass., having already had to eliminate 48 city jobs, cut the fireworks show to save at least one more.

Other towns canceling their fireworks shows include Nixa, Mo., whose Chamber of Commerce said the city doesn't have $12,000 to blow up in 18 minutes.

Bristol, N.H., removed the $8,000 the town usually spends on fireworks from the operating budget before it went before voters in March. In nearby Milford, there will be a bonfire instead of fireworks after voters refused to approve the $10,000 cost.

After the town of York, Maine, announced it would not be funding this year's display, local businesses and organizations stepped forward to pay for fireworks.

In Kailua, Hawaii, an outpouring of local contributions saved the The 61-year-old Fourth of July Kailua fireworks show. In all, $53,000 was raised this year, well above the $42,000 needed for a 12- to 14-minute display. The extra money will be used to pay for expenses such as special-duty police and extending the show a few minutes longer - a little more bang for the buck.

But those disappointed that local police and fire departments are not overseeing large-scale spectacles should not decide to put on a do-it-yourself show.

With several Massachusetts towns (including Methuen, Peabody, Randolph, Abington and Bridgewater) canceling those shows due to budget constraints, a fireworks store across the border in New Hampshire is noticing sales are taking off.

April Walton at Phantom Fireworks in Seabrook, N.H., told CBS Station WBZ correspondent Christina Hager that she thought the weak economy might hurt sales. But because so many towns are canceling shows, she said, "People are coming here."

Apart from their illegality in most areas, fireworks are extremely dangerous. The latest data from the National Fire Protection Association indicates 9,800 Americans were treated for firework-related injuries in 2007.

The group also notes that more fires are reported in the country on July 4th than on any other day of the year. And fireworks account for half of those fires.