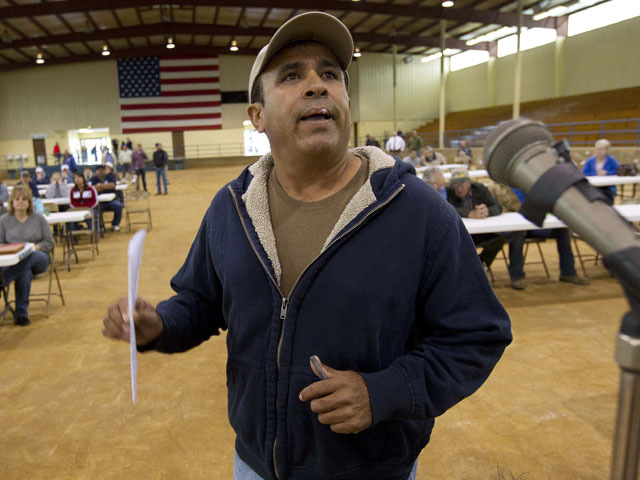 ONEONTA, Ala. - Potato farmer Keith Smith saw most of his immigrant workers leave after Alabama's tough immigration law took effect, so he hired Americans. It hasn't worked out: Most show up late, work slower than seasoned farm hands and are ready to call it a day after lunch or by midafternoon. Some quit after a single day.

In Alabama and other parts of the country, farmers must look beyond the nation's borders for labor because many Americans simply don't want the backbreaking, low-paying jobs immigrants are willing to take. Politicians who support the law say over time more unemployed Americans will fill these jobs. They insist it's too early to consider the law a failure, yet numbers from the governor's office show only nominal interest.

"I've had people calling me wanting to work," Smith said. "I haven't turned any of them down, but they're not any good. It's hard work, they just don't work like the Hispanics with experience."

Alabama passed its law in June and it was immediately challenged by the Obama administration as it has been in other states. Unlike those states' measures, Alabama's law was left largely in place while challenges played out in court, frightening Hispanics and driving many of them away.

The agriculture industry suffered the most immediate impact. Farmers said they will have to downsize or let crops die on the vine. As the season's harvest winds down, many are worried about next year.

In south Georgia, Connie Horner has heard just about every reason unemployed Americans don't want to work on her blueberry farm. It's hot, the hours are long, the pay isn't enough and it's just plain hard.

Horner, who runs an 8½-acre organic blueberry farm, said she tried to use the government's visa program to hire foreign workers, but it was too costly and time consuming.

She plans to stop growing organically and start using a machine to pick the berries.

"I did everything I possibly could to be legal and honest and not part of the problem," Horner said. "Morally, I can't knowingly hire illegal workers."

Gov. Robert Bentley, a Republican who signed the law, started a program last week to help businesses, particularly farmers, make up for the lost labor. So far, about 260 people interested in temporary agricultural jobs have signed up. About three dozen job openings have been posted, said Tara Hutchison, a spokeswoman for the Alabama Department of Industrial Relations. She said the department doesn't know of anyone who has been hired.

Sen. Scott Beason, a Republican, said he has received several emails and phone calls from people thanking him for helping them get jobs. He described one getting promoted from a part-time job with no benefits to a full-time job with benefits because some other immigrant workers left. He said none of the workers who thanked him have wanted to talk to the media.

"They are paranoid of publicity. They are like, `I don't want to get shredded up like y'all are.' ... I really can't blame them," he said.

Over the past two weeks, The Associated Press has reached out to the governor's office and other officials to provide the names of Alabama residents who have taken immigrant jobs. Either they were not made available, or didn't want to speak publicly.

Brent Martin, an Alabama resident, started working on a tomato farm in an area northeast of Birmingham after the law was passed. On Thursday, he and two other Americans were clearing about 24,000 tomato stakes off a 4-acre plot. He said few Americans who would stick with it.

"There are plenty who could do it, but would they? I don't know about that. I don't see why they wouldn't as bad as the economy is right now," Martin said.

Relatively high unemployment rates — about 9 percent in the U.S. and 9.9 in Alabama — are not likely to push Americans toward farm work, said Demetrios Papademetriou, president and co-founder of the Migration Policy Institute. He suggested the problem may be more deeply rooted.

"This is a sector and an industry ... that a long time ago, going back to the 1940s and probably before that was abandoned," Papademetriou said. "It was abandoned to foreign workers."

"Agriculture jobs are primarily in remote, rural areas. We see higher numbers of unemployed people in the big cities," he said.

Tomato farmer Wayne Smith said he has never been able to keep a staff of American workers in his 25 years of farming.

"People in Alabama are not going to do this," said Smith, who grows about 75 acres of tomatoes in the northeast part of the state. "They'd work one day and then just wouldn't show up again."

At his farm, field workers get $2 for every 25-pound box of tomatoes they fill. Skilled pickers can make anywhere from $200 to $300 a day, he said.

A crew of four Hispanics can earn about $150 each by picking 250-300 boxes of tomatoes in a day, said Jerry Spencer, of Grow Alabama, which purchases and sells locally owned produce. A crew of 25 Americans recently picked 200 boxes — giving them each $24 for the day.

Spencer said the Americans he has linked up with farmers are not physically fit and do not work fast enough.

"It's the harshest work you can imagine doing," Spencer said.