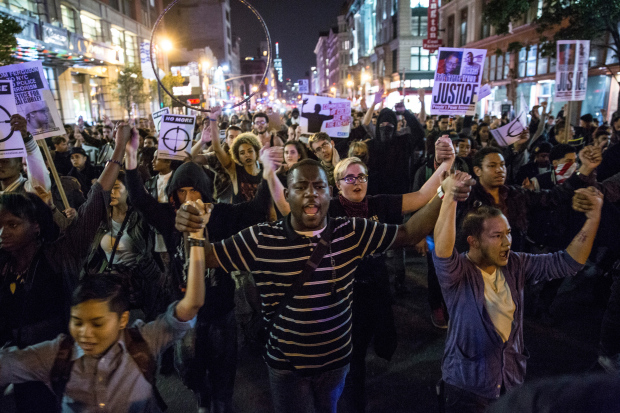 Thousands of people flooded city streets from Los Angeles to New York late Monday in passionate - but initially peaceful - protest of a grand jury's decision not to indict a white police officer who killed a black 18-year-old in Ferguson, Missouri.

They led marches, waved signs and shouted chants of "Hands Up! Don't Shoot," the slogan that has become a rallying cry in protests over police killings across the U.S.

Activists had been planning to protest even before the nighttime announcement that Officer Darren Wilson will not be charged in the shooting death of Michael Brown.

The racially charged case in Ferguson has inflamed tensions and reignited debates over police-community relations even in cities hundreds of miles from the predominantly black St. Louis suburb. For many staging protests Monday, the shooting was personal, calling to mind other galvanizing encounters with local law enforcement.

Police departments in several major cities said they were bracing for large demonstrations with the potential for the kind of violence that marred nightly protests in Ferguson after Brown's killing. Demonstrators there threw Molotov cocktails and police fired smoke canisters, tear gas and rubber bullets.

Washington protesters staged a peaceful march down U street from the African American Civil War memorial. Some residents called the Ferguson decision a "failure in justice," CBS affiliate WUSA reported.

"Wasn't looking for conviction, just an indictment. Couldn't even get that," said one protester.

In Los Angeles, which was rocked by riots in 1992 after the acquittal of police officers in the videotaped beating of Rodney King, police officers were told to remain on duty until released by their supervisors. While about 100 people gathered in Leimert Park, others held a small news conference demanding police change their policies and release as quickly as the names of those killed the names of the officers who shot them.

Police Chief Charlie Beck said the department had reached out to the community and was ready to send more officers to the streets if needed.

"We believe the outreach we have done will ensure that people are not only able to protest if they so desire, but will protest in a lawful manner," Beck said.

Demonstrators briefly blocked the I-10 freeway after hearing of the grand jury's decision, but were dispersed by the California Highway Patrol.

In Chicago, a group of about 100 protesters began to walk from the police department's headquarters toward downtown, there were no reports of violence. Earlier, about 200 protesters gathered outside the headquarters ahead of the announcement.

Denver Mayor Michael Hancock urged protesters to be peaceful in that city, where a civil jury last month found deputies used excessive force in the death of a homeless street preacher. Clergy gathered at a church to discuss the decision, and about a dozen people rallied in a downtown park with a moment of silence.

At Cleveland's Public Square, at least a dozen protesters held signs Monday afternoon and chanted "Hands up, don't shoot," which has become a rallying cry since the Ferguson shooting. Their signs references police shootings that have shaken the community there, including Saturday's fatal shooting of 12-year-old Tamir Rice, who had a fake gun at a Cleveland playground when officers confronted him.

In New York, groups of protesters gathered at Union Square to await the decision and then began to march through the streets when they heard the news. The area was the site of a mass protest of the Michael Brown shooting several months ago.

In a protest demonstration in Times Square, NYC police commissioner Bill Bratton and other officers were splattered with fake blood, CBS New York reported. Police were aware of what happend, but could not confirm any other information.

Meanwhile, Rev. Al Sharpton expressed his disappointment with the decision Monday night, according to CBS New York. "It was expected, but still an absolute blow for those of us that wanted to see a fair and open trial," Sharpton said. He had previously announced plans for vigils in 25 cities.

In Milwaukee, supporters and family members of a black man fatally shot by a white officer last spring have gathered again in the downtown park where the shooting happened.

About two dozen supporters of Dontre Hamilton put up small signs on the city Christmas tree at Red Arrow Park on Monday. The signs included messages such as "Justice for Dontre Hamilton" and "What if he was your brother."

Protesters are starting to assemble in the shadow of Philadelphia's City Hall in advance of Monday night's announcement in the Ferguson, Missouri, police shooting case.

Police Chief Charles Ramsey says he expects it to be a peaceful protest.

Several hundred protesters marched through downtown Philadelphia, yelling "No justice, no peace, no racist police!" In Pittsburgh, meanwhile, about 50 activists chanted "Justice for Michael Brown. Racist cops shut 'em down." The protest was short-lived, with activists saying they plan to regroup Tuesday at the federal courthouse.

Los Angeles Community activist Najee Ali said he met with police last week to discuss plans for a peaceful gathering in response to the Ferguson decision. The plans include having community members identify any "agitators" who may be inciting violence so officers can remove them from the crowd, he said.

"It was kind of unprecedented," Ali said of the meeting. "We never collaborate with the LAPD. They do what they do, and we do what we do."

But since violence erupted at the city's rallies protesting the shooting of 17-year-old Trayvon Martin in Florida, Ali said there was an effort to avoid repeat problems.

"We told them our plans of protest and we were demanding our First Amendment rights be protected," Ali said. "They said they're taking a hands-off approach," but they'd be in the wings if outside agitators try to stir up violence in the crowds.

Also in Oakland, protesters began to shut down Broadway Ave., and march toward police headquarters there, chanting "Ferguson, we got your back." But before long the demonstration broadened with all lanes of the I-580 freeway being taken over, KPIX tweeted.