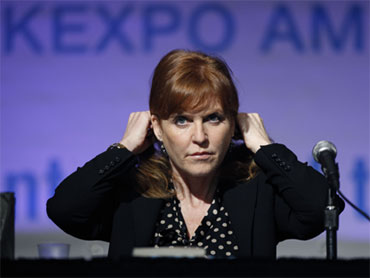 Sarah Ferguson says she had been drinking and was "not in my right place" when she was caught on video offering access to her former husband, Prince Andrew, for $724,000.

The Duchess of York made the comments to talk show host Oprah Winfrey in an interview to air Tuesday. The interview was taped Friday in Los Angeles, and excerpts were released Monday by Winfrey's Harpo Productions.

Ferguson tells Winfrey that she'd seen snippets of the video in airports but had not "faced the devil in the face" by watching it in its entirety. But she says she could tell she'd been drinking and was "in the gutter at that moment."

Ferguson has apologized for her lapse of judgment and has said she had financial problems.

The prince's ex-wife is apparently finding the U.S. welcoming despite the scandal engulfing her in her native Britain, reported CBS News correspondent Elaine Quijano.

The incident "may have cemented her sordid reputation overseas, but the attention may have helped her here," Quijano said.

"Fergie" was on a tour of New York last week, promoting her latest children's books in seemingly good spirits, alluding to her latest scandal casually, even comically.

She quipped during a speech, "It was quite difficult for me to get to the Javits Center (for an appearance at the Book Expo). (There were) One or two people in the way!"