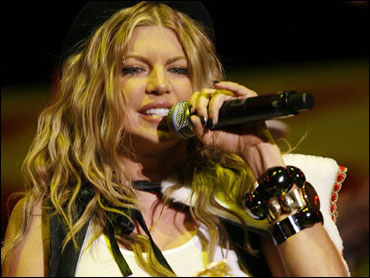 Although she's performed for thousands of fans as part of the Black Eyed Peas, Fergie says she was a bundle of nerves when she decided to strike out on her own tour.

"I had fears all the way," she told The Associated Press on Monday. "I was nervous at first getting onstage without my guys ... having a show be all my material. Now I'm getting more comfortable with it and I'm having fun with it."

Fergie will bring the fun to fans starting this week with the Fergie Verizon VIP Tour that will run nationwide through July. The 32-year-old singer said the tour is "fulfilling my lifelong dream right now."

"And I'm finally proving to myself that I can handle the stage," she said. "With this, I'm taking the lead, so it's finding out what I can do."

Fergie became a star when she joined the Black Eyed Peas four years ago and they went on to multiplatinum success with songs such as the Grammy-winning "My Humps" and "Where Is the Love."

But she didn't release her own album until last fall. So far, "The Dutchess" has sold more than 1 million copies, thanks to hits such as the club jams "Fergalicious" and "London Bridge."

However, Fergie, whose real name is Stacy Ferguson, said the success of more introspective songs such as "Glamorous" and her latest song, "Big Girls Don't Cry," have meant the most to her.

"'London Bridge' and 'Fergalicious' were definitely more surface songs," she said. "I have a very serious side as well, and it's completely different, and you don't know whether people are going to embrace that or not."

Still, Fergie hasn't gotten too soft. She and Nelly Furtado had a brief war of words that had people buzzing. Fergie said it was blown out of proportion: "I've talked about it, I'm done talking about it ... I think both of us have careers and we can rely on our talent."

These days, Fergie seems to be focusing on the positive.

"It's hard for me to complain right now, because life can't get much better," she said. "I'm just enjoying this moment."