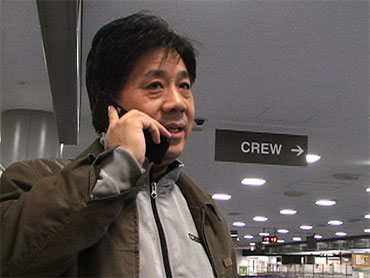 (CBS)
He's been compared to the Tom Hanks character in "The Terminal" by news media the world over, but Feng Zhenghu had never heard of the Hollywood blockbuster until a supporter recently brought him a portable DVD player and a copy of the 2004 Steven Spielberg movie.

"I feel my life is a lot harder than the character's," the 55-year-old Chinese human rights activist tells CBS News. "The movie is a romantic comedy, and my story is more of a tragedy."

Since Nov. 4, Feng has been an unusual fixture at the bustling Narita International Airport outside Tokyo. While the Hanks character became trapped at a JFK terminal when his native country was wiped off the map following a coup, Feng is a Chinese citizen with a valid Japanese visa. He refuses to pass through immigration checkpoints to enter Japan for a simple reason — he wants to go home.

But the Chinese government has blocked his path since mid-June. Airlines in Japan - including U.S.-based Northwest Airlines - denied him boarding four separate times, citing orders from Chinese authorities. On four other instances, he made it as far as Pudong International Airport in Shanghai - only to be sent back to Tokyo in increasingly forceful manners. After the last round of tussles, Feng put his foot down and began camping out at Narita.

"I want to wake up the Chinese government's respect for human rights through my physical suffering and personal humiliation," explains the Shanghai-based economist turned human rights author and blogger. "But I also want to tell more people that we have to fight for our own rights."

Every day, thousands of arriving passengers and crews walk past him right before passport control at the south wing of Terminal One. Though they see a calmly seated man with two small suitcases by his feet, Feng views his action as a lonely protest. A handwritten sign next to him reads: "Stuck here is a Chinese citizen who exposed corruption, helped the poor and has been denied entry into China eight times by the Chinese authorities."

Feng says he ran afoul of officials in his country for openly supporting the pro-democracy movement that was crushed in the 1989 Tiananmen Square crackdown. After studying and working in Japan in the 1990s, Feng returned to Shanghai - only to be sentenced in 2000 to three years in prison on what he called trumped-up charges of "illegal business activities."

After prison he became a self-taught lawyer, advocating the rule of law and providing legal assistance to Shanghai's underprivileged. His mild political stance, however, did not prevent him from becoming a troublemaker in the eyes of local authorities. Feng said he was pressured to leave China in April ahead of the 20th anniversary of the Tiananmen crackdown, but later realized the government had used the sensitive occasion to force him into permanent exile.

Now, at Narita, Feng has been confined to a sterile area with a small bathroom being the lone amenity — a sharp contrast to "The Terminal", in which Hanks' character camped in the international lounge, roaming the building for food and books, finding freelance work, and even falling for a beautiful flight attendant.

Feng sleeps on a narrow steel bench between 11pm and 5am - the only downtime at this commercial aviation hub. He survived the first few days on just water, hasn't showered for almost a month and dearly misses his family in China.

"This is also a lifestyle," Feng says with a smile. "It's actually a lot better than prison - I was in solitary confinement back then."

Despite the long and grueling days, Feng has settled into a productive daily routine. Equipped with a cell phone and a laptop, he writes, talks, blogs and tweets — sometimes even helps translate for connecting Chinese passengers.

Constant communication with the outside world keeps Feng aware of major current events, including President Obama's recent visit to China. While many critics have faulted the president for being too soft on China's human rights record, Feng said he appreciated Mr. Obama's effort to raise the topic of online freedom in Shanghai.

"Obama shouldn't bear the responsibility of improving human rights in China - he is the U.S. president, not the Chinese president," he says. "My view has always been China's problems have to be solved by us Chinese people."

As reports of his plight spread, Feng has turned into an unlikely celebrity. Having received thousands of encouraging texts and email messages, he now boasts almost 5,000 followers on Twitter, who have launched a donation fund in his name. Supporters from around the world - including many airline crews - stop by to give him food and other supplies, prompting some complaints by airport officials over his ever-expanding "storage space."

But even the usually stoic Japanese officials appear to have been moved by Feng's passion and determination. They initially refused to help him buy any food from shops past the immigration checkpoint - now they turn a blind eye to his incessant phone calls in a no-phone zone and have designated an area in the terminal for media to interview him. (They still draw the line on videotaping though, repeatedly trying to stop CBS News from recording an interview with Feng on his bench.)

Feng says the outpouring of support has highlighted the power of civil society, and makes him feel abandoned no longer. His biggest source of inspiration, however, comes from his love for China, as well as his optimism for its future.

"China has a lot of difficulties and problems, but I'm still eager to return to my homeland," he says. "This doesn't make me brave — it only shows my confidence in China's development, in the country's laws and in the universal value of human rights."