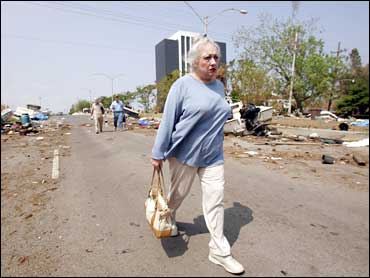 Mayor Ray Nagin defended his plan to return up to 180,000 people to the city within a week and a half despite concerns about the short supply of drinking water and heavily polluted floodwaters.

But Nagin said his plan was developed in cooperation with the federal government and balances safety concerns and the needs of citizens to begin rebuilding.

"We must offer the people of New Orleans every chance for a sense of closure and the opportunity for a new beginning," he said.

Nagin said the Algiers, Garden District and French Quarter sections would reopen over the next week and a half, bringing back more than one-third of the city's half-million inhabitants. City officials later backed off setting a specific date for reopening the famous French Quarter, the city's main tourist draw.

Allen said a prime public health concern is the tap water, which in most of the city remains unfit for drinking and bathing. He said he was concerned about the difficulties of communicating the risk of using the water to people who return and might run out of bottled water.

Another concern is the risk of another storm hitting the region, threatening an already delicate levee system and possibly requiring residents to be evacuated again, he said.

Allen, who planned to meet with Nagin on Monday, said federal officials support the mayor's vision for repopulating the city, but he is concerned about the mayor's timeline.

"Our intention is to work with the mayor...in a very frank, open and unvarnished manner," he said.

Business owners were allowed back in to some sections of the city to begin the long process of cleaning up and rebuilding, part of Nagin's plan to begin reviving the city by resuming a limited amount of commerce.

But confronted with damage that could take months to repair, many said hopes for a quick recovery might be little more than a political dream.

"I don't know why they said people could come back and open their businesses," said Margaret Richmond, owner of an antiques shop on the edge of the city's upscale Garden District that was looted. "You can't reopen this. And even if you could, there are no customers here."

The Wal-Mart store in uptown New Orleans, built within the last year, survived the storm but was destroyed by looters.

"They took everything, all the electronics, the food, the bikes," said John Stonaker, a Wal-Mart security officer. "People left their old clothes on the floor when they took new ones. The only thing left are the country-and-western CDs. You can still get a Shania Twain album."

All the areas to be reopened this week were spared Katrina's flooding. Electricity and clean water have been restored to some sections.

In the French Quarter, the hum of generators, the thumping of hammers and the whir of power tools cut through the air Saturday as business owners were allowed in to survey the damage and begin cleaning up. Some threw an impromptu street party, complete with a traditional feast of red beans and rice.

At the famous French Quarter restaurant, The Court of Two Sisters, director of food and beverages Andrew Orth was removing plywood from the windows on Saturday morning.

"We couldn't open even if the electricity was on," Orth said. "First we've got to clean the rotted food out of the coolers and probably replace them."

Orth estimated it would take several weeks to get the restaurant ready to serve diners.

The Hyatt was severely damaged, but some hotels along Canal Street on the edge of the French Quarter had less recovery work ahead.

The Sheraton had damage to the top floors and to a huge ballroom where a retractable skylight and massive window were smashed. The hotel also had a solid disaster plan in place that included bringing in portable toilets, stockpiling water and sheltering the guests.

The Sheraton began renting rooms two weeks after the storm. By Saturday, 100 rooms were taken at $249 each, mostly by FEMA workers and journalists. They had air conditioning and working bathrooms, thanks to water the company trucked in and treated. Twice-weekly maid service would start next week.

"We haven't had any complaints," General Manager Don King said.

Meanwhile, President Bush on Friday ruled out raising taxes to pay the massive costs of Gulf Coast reconstruction, saying other government spending must be cut to pay for a recovery effort expected to swell the national debt by $200 billion or more.

The chairman of Bush's National Economic Council, Al Hubbard, made clear that Hurricane Katrina recovery costs are "coming from the American taxpayer." Another top aide, domestic policy adviser Claude Allen, said the administration had not identified any budget cuts to offset the disaster expense, and Bush did not name any either.

Congress already approved $62 billion for the disaster, but that is expected to run out next month and require another budget-busting installment. The federal deficit was projected at $333 billion for the current year before the storm slammed into the Gulf Coast more than two weeks ago.