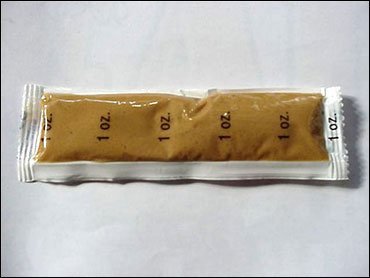 The Federal Emergency Management Agency says some emergency meal kits given to storm victims in Kentucky and Arkansas may contain recalled peanut butter.

FEMA says the kits may contain packets of peanut butter that are part of a national recall over possible salmonella contamination.

The agency said in a statement Wednesday that the kits were manufactured by Red Cloud Food Services Inc. of South Elgin, Ill., under the Standing Rock label.

The agency says people who have received meal kits should inspect them and immediately dispose of any peanut butter packets.

Meanwhile, federal health officials are defending their handling of the outbreak, telling Congress they had been hot on the trail of a peanut processor even before they were certain that peanuts to blame for hundreds of illnesses.

The Food and Drug Administration "began its investigation prior to having a strong epidemiological link to a particular food," Stephen Sundlof, head of the agency's food safety center, said in testimony prepared for delivery to the Senate Agriculture Committee.

More than 500 people have been sickened as a result of the outbreak, and at least eight may have died because of salmonella infections. More than 430 products have been pulled off the shelves in a recall that reaches to Canada and Europe.

The first signs of the outbreak were detected in November by the Centers for Disease Control and Prevention. But disease detectives initially suspected chicken was the culprit in clusters of salmonella infections.