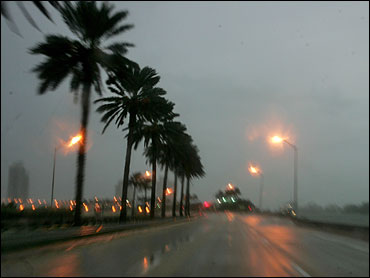 The federal government is exploring how to put Florida hurricane evacuees in foreclosed homes if a Katrina-like storm devastates the region and shelters, hotels and other housing options are full.

Officials told The Associated Press on Tuesday that it is an effort to find some benefit in the foreclosure crisis and keep people close to their homes and communities instead of scattering them around the country, which happened when Hurricane Katrina devastated New Orleans and other parts of coastal Louisiana and Mississippi almost four years ago. Thousands of victims who lost their homes in the storm moved to Houston, Atlanta and other cities, and many never returned.

New Orleans has been slow to recover, partly because of the lost population.

"When you have a diaspora that leaves the state it's very hard to get those guys back. You really want to prevent them from leaving the state," said Jeff Bryant, the Federal Emergency Management Agency's federal coordinating officer for Florida. "We want to keep them in their same local community."

The idea is still being developed, but FEMA would likely contact banks, other mortgage holders and their representatives to compile a list of available homes. The evacuees would then be assigned homes close to their own and FEMA would use a contractor, acting as its agent, to pay rent directly to whoever owns the home, said Jon Arno, FEMA's individual assistance branch director for Florida. His duties include finding temporary housing for disaster victims.

If the idea works in Florida, it could serve as a model nationally.

In April, there were 278,287 homes in some stage of foreclosure in Florida, according to RealtyTrac.

Images of Katrina refugees, from the lines to get on buses at New Orleans' Superdome to the numerous cots at Houston's Astrodome, are seared into memory. When the evacuees made their way out of the Gulf Coast region, many boarded buses and planes without knowing their destination. Many of them were separated from immediate family with no way of finding them.

Bryant said the plan will probably only be implemented in a "large catastrophic event," anywhere the housing situation was devastated and only as a last resort.

"But a large disaster, everything has to be on the table, including foreclosed homes," said Ruben Almaguer, the new interim director of the state's Division of Emergency Management.

Angelo Edwards, a Katrina victim who just returned to New Orleans from Houston three months ago, likes the idea.

"It provides income to the bank, the person who holds the deed ... It's taking some of that inventory out of the market," he said. "With this program they could keep that family unit together."

Edwards said he would have rather stayed closer to New Orleans when he evacuated.

"Families dispersed across country and couldn't get back," he said.