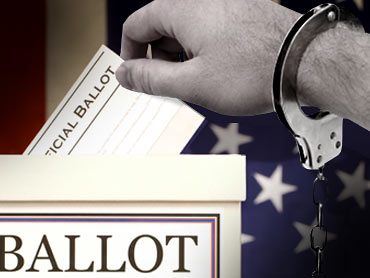 Incarcerated felons should be allowed to vote in Washington to ensure that racial minorities are protected under the Voting Rights Act, a federal appeals court ruled Tuesday.

The 2-1 ruling by a three-judge panel of the 9th U.S. Circuit Court of Appeals overturned the 2000 ruling of a district judge in Spokane. That judge had ruled that state law did not violate the act, and dismissed a lawsuit filed by a former prison inmate from Bellevue.

The two appellate judges ruled that disparities in the state's justice system "cannot be explained in race-neutral ways."

The issues the ruling raises about racial bias in the justice system are not unique to Washington state, said Marc Mauer, executive director of The Sentencing Project, a Washington, D.C., group promoting sentencing reform.

"They are issues that permeate the justice system and are relevant in every state," he said.

The lawsuit was filed by Muhammad Shabazz Farrakhan of Bellevue. He was serving a three-year sentence at the Washington State Penitentiary in Walla Walla for a series of felony-theft convictions when he sued the state in 1996.

Ultimately, five other inmates, all members of racial minority groups, joined as plaintiffs.

The lawsuit contended that because nonwhites make up a large percentage of the prison population, a state law prohibiting inmates and parolees from voting is illegal because it dilutes the electoral clout of minorities.

That was a violation of the U.S. Voting Rights Act of 1965, the lawsuit said.

The state contended that the lawsuit should be dismissed because the law was not intended to discriminate against minorities.

Last year, lawmakers passed a law that allows convicted felons to reregister to vote once they're no longer on parole or probation. Previously, felons who were no longer in Washington state custody but owed court-ordered fines and restitution were not allowed to vote.

Maine and Vermont are the only states that allow those behind bars to cast ballots.

The case is Farrakhan v. Gregoire.