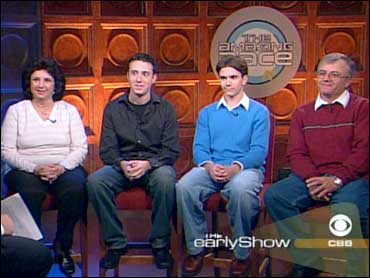 On Tuesday night's two-hour edition of "The Amazing Race," the five remaining teams flew from Costa Rica back to the United States.

Unfortunately for the Paolo family, their race filled with bickering and constant fighting came to an abrupt end when they fell from first place to last.

"When you're in a stressful situation like that it's really hard to not argue," explained older son D.J. "When you're competing for a million dollars you say and do a lot of things you don't normally do."

But Tony Paolo admitted life is not that different for them at home. "My son and wife are too much a like, and they fight a lot. Brian and I just stay out of it, and let them fight it out," he said.

"This is how we are," Marion added. "We fight, we make up, and we do it all over again. We love each other — that's the bottom line."

Marion's argument during the race is that her family did not follow her advice, and that got them in trouble. She asked them, for example, to turn the boat when they were on the lake. But did they listen?

D.J. was seen reacting in rage towards his mom. "She must have asked us to turn over the boat about 20 million times before that," he said.

Another bad decision, perhaps, was not taking the right way to get to the Grand Canyon. "We took the most direct way but got stuck in traffic at the main entrance," Brian said.

D.J. added: "Our whole strategy was in a foot race. I know Walter Bransen …"

"Who is kind of slow," Smith interjected.

"But I still thought he was faster than her (pointing at his mom)," D.J. said. "It was, do we stay with them and have a foot race or go for it?"

"I said we should have stopped and made a phone call and see the better way," Marion added. "They didn't want to do that. I said, 'Guys, make a phone call.' They said: 'Who are you going to call?' I felt like saying Ghost Busters or how about the national park.

"They never listen, no respect."

And when asked, she said with a smile that is true in every day of her life. "Every single minute of every day of every week of every year." So Smith gave her a hug.

"Thank you, Harry. Thank you. Pay attention, guys," she said to her family. "Listen to this very nice man."

There are two things the family is in agreement, however. One, the Weavers are not very likeable people.

"Last night we talked about what we wanted to say about the Weavers," D.J. said. "The bottom line is anyone who has a functioning brain, who watched the last two episodes, can see the reasons why people don't get along with them. They're very hypocritical. I mean, I could go on forever."

And two, the race was an unbelievable experience that they will never forget.

There is however lingering question about the Paolo's "Amazing Race." How is it that a man who works for the sanitation department of New York got lost at the beginning of the race?

Defending his father, Brian said it is not just Manhattan. It is "five separate cities: Staten Island, Manhattan, Bronx, Brooklyn and Queens."

"Never worked Lower Manhattan and to me it's a puzzle," Tony said. "I couldn't get out of that puzzle."

Still, he got a lot of grief from his co-workers for getting lost.

"Forget it," Tony said. "They made a map. At work they call me 'the zip,' so they made a map where the zip was in Manhattan, and we're 'clueless,' when my wife dropped the clue.

And that is what the Paolos said the race was for — the fun.

If you can't get enough of "The Amazing Race," you can catch Harry Smith this afternoon at CBS.com, where he is co-hosting this week's edition of the "Finish Line," "The Amazing Race" online talk show. Click here to log on at 1 p.m./ET; 10 a.m./PT.

How to Talk to Senior Parents About Driving