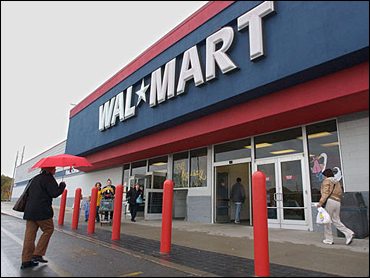 Federal agents raided Wal-Mart's headquarters and 60 of its stores across the nation Thursday, arresting more than 300 illegal workers in an immigration crackdown at the world's biggest retailer.

Law enforcement sources said the investigation grew out of earlier probes of Wal-Mart cleaning crew contractors in 1998 and 2001.

Federal agents tell CBS News that two cleaning contractors are under investigation and that undercover surveillance shows Wal-Mart executives and store managers knew illegal immigrants were cleaning stores. A number of Eastern Europeans are among the suspected illegals rounded up, McNamara reports.

"We have seen no evidence of this from the INS, and, if that turns out to be true, we will cooperate fully with law enforcement officials," Wal-Mart spokeswoman Mona Williams said.

The workers were arrested as they finished their night shifts at Wal-Mart stores in 21 states. Agents also hauled away several boxes of documents from an executive's office at Wal-Mart headquarters in Bentonville.

An employer can face civil and criminal penalties for knowingly hiring illegal immigrants or failing to comply with certain employee recordkeeping regulations.

Wal-Mart Stores had sales last year of $244.5 billion. The company has about 1.1 million employees in the United States, and it uses more than 100 third-party contractors to clean more than 700 stores nationwide, Williams said.

"We require each of these contractors to use only legal workers," she said.

All the arrested workers were in the country illegally, said Garrison Courtney, a spokesman with Immigration and Customs Enforcement. They were detained at local immigration offices. Those who had no criminal record were released with instructions to appear before immigration judges.

Wal-Mart is not the first big company to be targeted in an immigration investigation. Six managers at Tyson Foods, based one town away from Wal-Mart in Springdale, were charged in an immigrant-smuggling case in 2001.

One defendant shot himself to death a few months after being charged, and two managers entered guilty pleas early in the case. A jury acquitted the poultry company and three other managers.

Ulysses A. Yannas, an analyst with the investment firm Buckman, Buckman and Reid, said it is too much to expect Wal-Mart to keep track of all of its vendors' workers. But he said the investigation could present a problem for the company.

"It is a question of what else it might bring out. These are long, drawn-out processes," Yannas said.

Top Wal-Mart officials learned of Thursday's sweep when store managers began calling headquarters for guidance in dealing with the raids.

Courtney said agents searched the office of one of Wal-Mart's executives. Williams, the spokeswoman, said they spent several hours in the office of a "mid-level manager" at Wal-Mart's headquarters and carried away several boxes of paperwork.

She said she did not know if any other Wal-Mart administrative offices were searched.