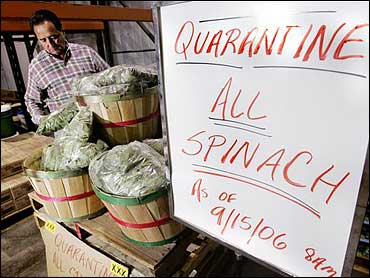 Tampering is not suspected in an outbreak of E. coli bacteria linked to fresh spinach, U.S. health officials said Monday as they probed for a source of the contamination and warned consumers not to resume eating uncooked spinach products.

The FDA has linked a California company's fresh spinach to the outbreak, which has killed one person and sickened at least 108 others. Investigators are working to pinpoint the source of the bacteria. Possible sources include contaminated irrigation water, known to be a problem in the state's Salinas Valley, a major produce-growing area.

"At this time we have no evidence supporting tampering," FDA spokeswoman Susan Bro said.

The FBI is monitoring the situation, bureau spokesman Rich Kolko said. He added it was a routine and precautionary measure, and is not indicative of any suspicious activity.

Bro also dismissed a claim by Natural Selection Foods LLC, the country's largest grower of organic produce, that its organic spinach products had been cleared of suspicion. "The FDA has not cleared any products from the list and continues to recommend consumers avoid eating fresh spinach products," Bro said.

Some 34 separate brands of bagged spinach are packed by Natural Selection, reports CBS News correspondent John Blackstone. Its variety of labels can be found in every major city and 74 percent of America's supermarkets.

Growers have been warned on the subject, too. In 2004 and again in 2005, the Food and Drug Administration's top food safety official told California farmers they needed to do more to increase the safety of the fresh leafy greens they grow.

The current cases are the latest in a string of 19 food-poisoning outbreaks since 1995 that have been linked to lettuce and spinach. At least eight were tied to produce grown in the Salinas Valley.

"In light of continuing outbreaks, it is clear that more needs to be done," the FDA's Robert Brackett wrote in a Nov. 4, 2005, letter.

Suggested actions included discarding any produce that comes into contact with floodwaters. Rivers and creeks in the Salinas watershed are known to be periodically contaminated with E. coli, Brackett said.

"When we see a situation like this we have to think all the way from the farm to the table and look at every step in the manufacturing process to find out what ultimately is the root cause," Dr. Julie Gerberding, director of the Centers for Disease Control said on CBS News' The Early Show.

Natural Selection has maintained its recall of 34 brands of fresh spinach products. However, the company said late Sunday the manufacturing codes from packages of spinach that had infected patients turned over to health officials all were from non-organic spinach. The company packages both organic and conventionally grown spinach in separate areas at its San Juan Bautista, California, plant.

Those brands include the company's own labels and those of other companies that had contracts with Natural Selection to produce or package its spinach.

The FDA and California Department of Health Services were reviewing irrigation methods, harvest conditions and other practices at farms possibly involved.

The spinach could have been contaminated in the field or during processing. About 74 percent of the fresh-market spinach grown in the U.S. comes from California, according to the California Farm Bureau Federation.

E. coli cases linked to tainted spinach have been reported in 19 states, with Wisconsin reporting the most cases, including the death of a 77-year-old woman.

In Ohio, state health officials said they were investigating the death of a 23-month-old girl who was sickened by E. coli to determine whether the case was related to the outbreak. The girl's mother said she often buys bagged spinach.

Natural Selection recalled its packaged spinach throughout the United States, Canada and Mexico as a precaution after federal health officials said some of those hospitalized reported eating brands of prepackaged spinach distributed by the company.

However, some restaurants and retailers may be taking spinach out of bags before selling it, so consumers should not buy it at all, the FDA said.

Boiling contaminated spinach can kill the bacteria, but washing will not eliminate it, the CDC warned.

Federal officials stressed that the bacteria had not been isolated in products sold by Natural Selection. As the investigation continues, other brands may be implicated, officials said.

Natural Selection was founded in 1984 by Drew and Myra Goodman. Within two years, its best-known brand, Earthbound Farm, began shipping pre-washed, packaged salad fixings, and the company's "spring mix" became a mainstay of restaurants and supermarkets.