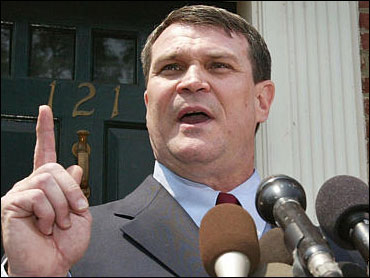 The government asked a federal judge Monday to dismiss a lawsuit by Dr. Steven J. Hatfill, a bioterrorism expert who claims his reputation was ruined when law enforcement officials called him a "person of interest" in the 2001 anthrax attacks.

U.S. District Judge Reggie B. Walton said he would rule later, but did agree to a government request to further delay most trial preparations until October.

In his lawsuit filed last August, Hatfill said Attorney General John Ashcroft and others identified him as a person of interest to detract attention from their inability to find the person responsible for sending anthrax-laced envelopes to government and media offices in October 2001. He was the only person identified that way by government officials.

Five people died and 17 others were sickened by the anthrax attacks.

Hatfill, who has denied any role in the attacks, seeks to clear his name and recover unspecified monetary damages. His lawsuit claims the Justice Department got him fired from a job directing bioterrorism research at Louisiana State University, and that he has been unable to find another position in his field.

Deputy Assistant Attorney General Jeffrey Bucholtz said Ashcroft's identification of Hatfill actually was an effort to "downplay" his status by making it clear he was not considered a suspect.

Hatfill lawyer Mark A. Grannis scoffed at that claim.

"Mr. Ashcroft acted to protect both the department and his own political image at the expense of Mr. Hatfill's constitutional rights," Grannis said.

Bucholtz also said Hatfill should have gone through federal administrative appeal procedures if he felt he was wrongly fired, because the LSU project was federally funded. Bucholtz added that Hatfill is not barred from any other job.

Judge Walton was skeptical Hatfill could find work in his field after being publicly linked to the anthrax investigation.

"At least by implication, he's disbarred," Walton said. "The information is now out there. The man's a pariah. Nobody's going to hire him."

Hatfill once worked as a researcher at the Army Medical Research Institute of Infectious Diseases at Fort Detrick in Frederick, Md. The facility housed the strain of anthrax found in the envelopes sent to the victims, though Hatfill repeatedly has said he never worked with the infectious disease.

The FBI had Hatfill under 24-hour surveillance for many months following the attacks. In one incident, agents in a vehicle trailing Hatfill ran over his foot on a Washington street. Hatfill was not seriously hurt, and the surveillance has been curtailed.

In calling for the lawsuit to be dismissed, Bucholtz said Hatfill wants a judge to rule on whether the investigation was properly conducted, including whether the FBI surveillance was proper.

"It is the executive branch and not the courts that conduct criminal investigations," Bucholtz said.

"I don't micromanage the investigation," Walton said. "I don't know all of the information the government knows."

Grannis said he wasn't asking the court to examine the Justice Department's every move.

"We're not asking for micromanagement here," Grannis said. "We're asking for a day in court to cover abuses that have already occurred."

In agreeing to further delay the trial, Walton backed the government's contention that Hatfill's requests for documents and interviews to prepare for the trial could hinder the ongoing probe.

"At some point, Dr. Hatfill is going to have to have his day in court," Walton said. "I don't think that point has occurred yet."