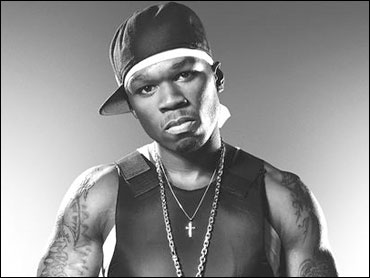 Investigators also probed whether Run-DMC disc jockey Jam Master Jay was shot to death in 2002 for defying an unspoken recording industry blacklist of 50 Cent, whose real name is Curtis Jackson, the documents show.

The allegations are laid out in a previously sealed search warrant affidavit contained in a routine motion filed last week by the defense attorney for Murder Inc. founder Irving "Irv Gotti" Lorenzo, who is charged in a racketeering case with using his chart-topping label to launder more than $1 million in McGriff's drug money.

The affidavit was published Tuesday on The Smoking Gun, a Web site that specializes in posting court and police documents.

Internal Revenue Service criminal investigator Francis Mace writes in the 2003 document, filed under an application to search Murder Inc.'s Manhattan offices, that investigators believed the shooting of 50 Cent in May 2000 was revenge for the song "Ghetto Koran," which recounts some of the history of notorious drug kingpin Kenneth "Supreme" McGriff's reign as head of one of the city's most violent drug crews. Investigators believe Murder Inc. employees were involved in McGriff's continuing effort to kill 50 Cent, who survived the shooting.

The federal document reads: "Messages transmitted over the Murder Inc. pager indicate that McGriff is involved in an ongoing plot to kill this rap artist, and that he communicates with Murder Inc. employees concerning the target."

Federal agents and police detectives also were looking into links between the McGriff-50 Cent rivalry and the killing of Jam Master Jay, who was a mentor to 50 Cent when he was starting out in the 1990s. The shooting of the DJ, whose real name was Jason Mizell, in his New York recording studio remains unsolved.

"Agents are still trying to determine whether Mizell's homicide has any connection to the ongoing dispute between McGriff and 50 Cent," Mace wrote. "Law enforcement agents are investigating the possibility that Mizell was murdered for defying the blacklist of 50 Cent."

A spokesman for the U.S. attorney's office in the New York City borough of Brooklyn, which is overseeing the investigation, had no comment on the document.

An attorney for McGriff, Robert Simels, said that while he no longer represented McGriff in this case he was familiar with the document and it represented "much ado about nothing." He said the allegations in the affidavit disappeared from later government filings, leading him to conclude that even the government no longer believed them.

McGriff and some Murder Inc. employees were continuing to plot the murder of 50 Cent, Mace wrote, citing text messages to McGriff from associates tracking the rapper's whereabouts.

Murder Inc. changed its name to The Inc. last year after executives said the label's image was hurt by court filings alleging that they had been laundering drug money from McGriff.