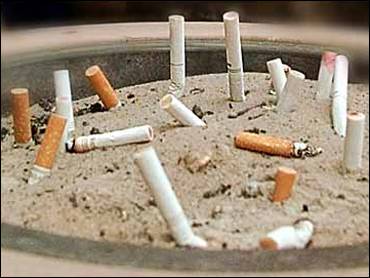 In 17 states where the federal government spent $128 million to discourage tobacco use, smoking dropped by about three percentage points over eight years, just over half a point more than in states without the program.

The program was responsible for reducing the number of smokers in the target states by about 104,000, estimated Frances A. Stillman, a researcher at the Johns Hopkins Bloomberg School of Public Health.

Translating the results to the entire nation, the program, called the American Stop Smoking Intervention Study, or ASSIST, would have cut the number of smokers by about 278,700, said Stillman, first author of a study appearing Wednesday in the Journal of the National Cancer Institute.

The program was funded by the institute.

Studies by the Centers for Disease Control and Prevention suggest that cigarette smoking is responsible for more that 440,000 deaths a year in the United States. Smoking has been linked to heart disease, emphysema and other respiratory system diseases, stroke and a number of different types of cancer.

The anti-smoking program trained local advocacy groups to lobby for passage of higher cigarette excise taxes and to promote regulations for smoke-free environments. The program also mounted a public relations effort to counter an estimated $47 billion spent by industry to market tobacco products during the study period and included efforts to limit underage access to tobacco.

At $128 million, the program spent about $1,200 for each smoker who kicked the habit. Elizabeth A. Gilpin, a University of California, San Diego, researcher and a co-author of the study, called that cost "a real bargain."

"Most smoking cessation programs will spend that (for each smoker)," said Gilpin. "That's just for a few hours of a counselor's time. When you think about what you save in health care costs, $1,200 is a real bargain."

In the study, researchers used industry cigarette sales figures and tobacco use surveys to determine the impact of the ASSIST effort. The study found that smoking decreased nationally by about 2.41 percentage points. In the 17 states where the ASSIST program was in action, smoking declined by 3.02 percentage points, a difference of .61 point.

During the eight years of the ASSIST program, smoking among all the U.S. population dropped from 24.67 percent to 22.26 percent, and from 25.19 percent to 22.17 percent in the targeted states.

Stillman said the 17 states included some that already had strong anti-smoking programs and some that didn't.

She said the results showed that "states can reduce smoking prevalence and the enormous health and economic burden of smoking if they put in place proven programs and policies."

The impact of the program may have been blunted somewhat by the tobacco industry. Stillman said the Federal Trade Commission estimates that the industry spent about $47 billion promoting tobacco products nationally during the period of the ASSIST program.

Jennifer Golisch, a spokeswoman for Philip Morris USA, Inc., the nation's largest tobacco company, would not comment on the study, but she said her firm now spends $100 million a year to discourage underage smoking. She said starting in 1999, the company reduced its cigarette ads in magazines by 50 percent. Golisch said Philip Morris also supports regulation of smoking in public places and favors regulation of the tobacco industry by the Food and Drug Administration.

Golisch said Philip Morris has found that increased excise taxes on cigarettes, a major element of the ASSIST program, has unintended consequences. She said when taxes go up on cigarettes in one locale, smokers tend to seek cigarettes from areas with lower tobacco taxes, such as nearby states, Indian reservations or foreign countries.