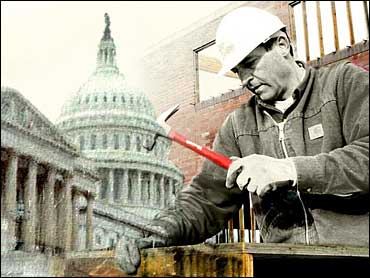 Despite a goal of giving small businesses 23 percent of government contracting dollars, the federal contracting system works in favor of larger companies, congressional investigators have found.

Small firms obtaining government contracts are considered "small" for the life of a contract, which could last 20 years, the General Accounting Office found. However, some of those companies become large firms through growth, mergers or takeovers.

The continuous orders to these firms leave less money for new contracts to small businesses, the GAO told the House Small Business Committee in testimony prepared for release Wednesday.

Congress' investigative agency also told lawmakers that federal databases that are supposed to list small businesses are inaccurate and include many major national companies. Federal agencies relying on these lists can think they're meeting the 23 percent goal when they are not.

Without naming the firms, he said $460 million of the total was reported as small business awards and counted incorrectly toward meeting the 23 percent standard.

"This initial report from the General Accounting Office is troubling," said Rep. Donald Manzullo, R-Ill., the committee's chairman. "We must do a better job of certifying our small businesses to ensure they are getting the federal contracts set aside for them."

The Small Business Administration has proposed a regulation that would require small businesses to certify their status annually. If they no longer qualify as a small business, agencies would have the option of diverting future contracting dollars toward small firms rather than ordering goods and services under existing contracts, officials said.

"We welcome the GAO's findings because we are already taking action to ensure small businesses continue to receive their fair share of federal procurement dollars," SBA spokeswoman Sue Hensley said.

The SBA generally considers firms small businesses if they are independently owned and operated and not dominant in their fields. Depending on the business category, additional requirements are imposed based on number of employees and revenues.

Lloyd Chapman, president of the Microcomputer Industry Suppliers Association, will tell the committee that favoritism toward large companies is not an accident.

He said the move away from small businesses was "the direct result of over 15 years of a very well-orchestrated pattern of policies, regulations and legal interpretations."

Chapman said subsidiaries of major companies were receiving contracts, including firms with up to 44,000 employees and annual revenues of up to $12 billion.

"Any and all obstacles to the achievement of the federal government's contracting goals for small disadvantaged business and woman-owned firms need to be removed immediately," Chapman said.
By Larry Margasak