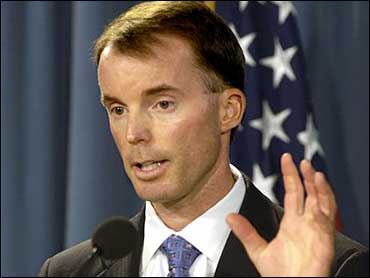 Charles "Cully" Stimson, the deputy assistant secretary of defense for detainee affairs, said in a radio interview last week that companies might want to consider taking their business to other firms that do not represent suspected terrorists.

Stimson's remarks were viewed by legal experts and advocacy groups as an attempt to intimidate law firms that provide legal help to all people, even unpopular defendants.

A Pentagon spokesman, Lt. Col. Brian Maka, said Stimson was not speaking for the Bush administration.

Stimson's comments "do not represent the views of the Department of Defense or the thinking of its leadership," Maka told The Associated Press on Saturday.

Stimson's "shameful and irresponsible" remarks deserve condemnation, said Neal Sonnett, a Miami lawyer and president of the American Judicature Society, a nonpartisan group of judges, lawyers and others.

Sonnett said in a statement that Stimson had made a "blatant attempt to intimidate lawyers and their firms who are rendering important public service in upholding the rule of law and our democratic ideals."

And most legal analysts say lawyers are duty-bound to defend even those accused of the most heinous crimes, reports Chen.

For a government attorney to call out these private attorneys and say that somehow they're tied up with terrorists or that somehow they don't have good motives is outrageous," says CBS News legal analyst Andrew Cohen.

Stimson on Thursday told Federal News Radio, a local commercial station that covers the government, that he found it "shocking" that lawyers at many of the United States' top law firms represent detainees.

Stimson listed the names of more than a dozen major firms he suggested should be boycotted.

"And I think, quite honestly, when corporate CEOs see that those firms are representing the very terrorists who hit their bottom line back in 2001, those CEOs are going to make those law firms choose between representing terrorists or representing reputable firms," Stimson said.

Asked who might be paying the law firms to represent Guantanamo detainees, Stimson hinted at wrongdoing for which some explaining should be done.

Stimson also described Guantanamo as "certainly, probably the most transparent and open location in the world" because of visits from more than 2,000 journalists since it opened five years ago.

He discounted international outrage over the detention center as "small little protests around the world" that were "drummed up by Amnesty International" and inflated in importance by liberal news media outlets.

FBI agents have documented more than two dozen incidents of possible mistreatment at the Guantanamo. In one, a detainee's head was wrapped in duct tape because he chanted the Quran; in a second, a detainee pulled out his hair after hours in a sweltering room.

In a December court ruling, a federal judge in Washington decried the plight of "some of the unfortunate petitioners who have been detained for many years in the terrible conditions at Guantanamo Bay."

The judge criticized a system in which dozens have been held without charges and cut off from the world for lack of English or knowledge about the law, leaving them no choice but to turn to a fellow prisoner with outside connections for legal help.

Since the detention center opened, the U.S. military has transferred or released about 380 detainees. Some 395 remain locked up in the prison.