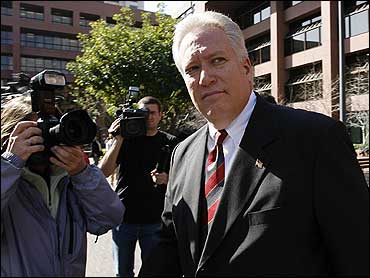 A former CIA agent rose to the agency's No. 3 rank despite a record of misconduct that stretched over 20 years, prosecutors said, until his career came to an end with his conviction in a bribery scheme.

In court papers, prosecutors describe how Kyle "Dusty" Foggo was investigated in the late 1980s for punching a bicyclist in a traffic dispute and for numerous relationships with foreign women that could have compromised security.

Foggo rose through the ranks to become the agency's executive director from 2004 to 2006. Had his crimes gone uncovered, he planned to retire and run for Congress in San Diego, according to prosecutors.

Instead, Foggo is scheduled to be sentenced Thursday in U.S. District Court in Alexandria after pleading guilty to a single count of fraud as part of a plea bargain. He is the highest ranking CIA officer ever to be convicted of a federal felony.

The fraud was part of a bribery ring that included Foggo's old friend, contractor Brent Wilkes, and former Rep. Randy "Duke" Cunningham, both of whom have been sentenced to years in prison.

Court papers filed this week offer the most detailed glimpse yet of Foggo's misconduct, which included getting his mistress hired to a $100,000 a year job at the CIA and steering millions of dollars in CIA contracts to Wilkes.

In the late 1980s, when Foggo was a young CIA agent, a foreign government filed a formal diplomatic protest following a traffic encounter involving Foggo. According to an affidavit from Jim Olson, a former CIA counterintelligence chief who was Foggo's supervisor at an undisclosed location, Foggo's car was blocking a bicycle path and an upset cyclist smacked the car's trunk. Foggo responded by pushing the man off his bike, punching him in the face and driving off.

Foggo claimed the incident was fabricated by local authorities as part of a shakedown; Olson said he found Foggo's explanation "entirely unrealistic and implausible." But Olson said he lacked the authority to interview local police about the incident, and could do nothing more than refer it to CIA headquarters for possible disciplinary action.

Foggo's lawyers said in court papers that the allegations have no merit and that Foggo's name was cleared after an investigation.

Olson said he was "flabbergasted" that then-director Porter Goss made Foggo executive director and that Goss "had been taken in by a 'con man' like Foggo."

"I was not surprised when I learned of his guilty plea," Olson wrote in his affidavit. "I knew Mr. Foggo was a person who was seriously flawed, ethically and morally, who would cut corners to achieve his aims."

Goss, in an affidavit, said he felt "deceived and betrayed by Mr. Foggo, who personally assured me that there was nothing that would reflect poorly on me or on the CIA if I selected him."

Court papers also spell out Foggo's plan to run for Congress in California. According to two affidavits, Foggo told multiple people that he was waiting for Cunningham to retire and then intended to run for his seat.

Prosecutors had sought for several weeks to disclose additional details of Foggo's misconduct, saying the public needed to know the depth of his misdeeds. But defense lawyers said prosecutors should not be engaged in public relations, and that the material in question was irrelevant to the judge's sentencing decision.

A spokesman for the U.S. Attorney's Office declined to say whether this week's court filings include everything prosecutors wanted to release publicly.

Prosecutors agreed as part of the plea bargain that they would not seek a sentence longer than three years. U.S. District Judge James Cacheris does not have to abide by that, and has asked previously whether Foggo received an exceptionally generous deal.

Foggo's lawyer, Mark MacDougall, did not return a phone call seeking comment. In a defense memo made public Wednesday, Foggo's lawyers argue for probation rather than jail time. They argue that much of the good work Foggo did over a 24-year CIA career, if it could be known publicly, would show that a light sentence is warranted.

At previous court hearings, MacDougall said the only thing to which Foggo has admitted guilt is helping his friend land a contract for a single pallet of bottled water.

Prosecutors say the bottled water - delivered by a shell company set up by Wilkes and his nephew to a CIA station in Iraq at a 60 percent markup - was just part of a pattern of criminal and unethical behavior that ran throughout Foggo's career.

"Foggo insists upon portraying himself as a patriot. This is a self-image he cultivated throughout his scheme," prosecutors wrote, "and his ability to ascend up CIA ranks, despite a record of misconduct, demonstrates how good he was at deceiving others."

Among other details in court papers: