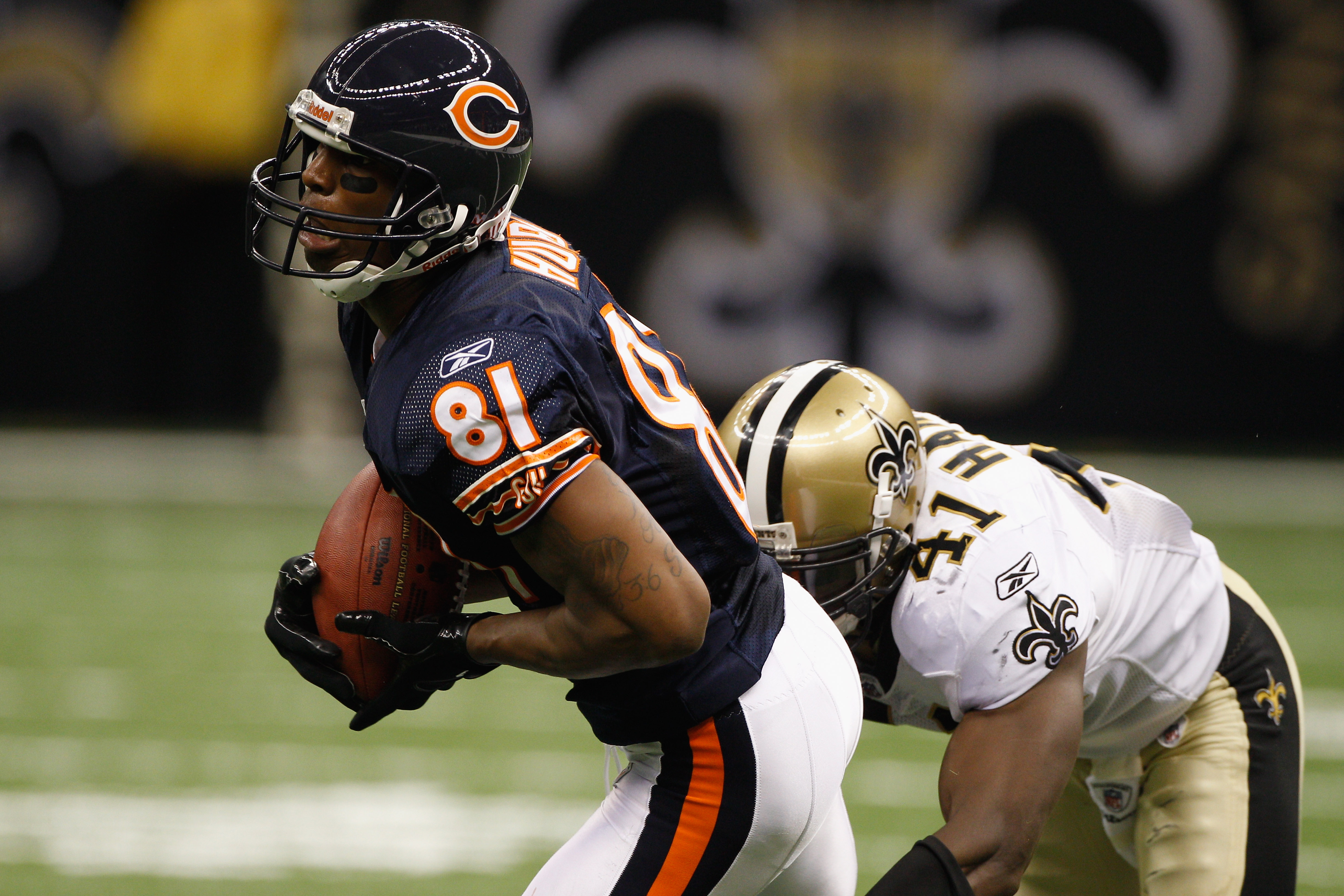 CHICAGO - Chicago Bears wide receiver Sam Hurd was locked up in federal custody Thursday as his stunned teammates learned he had been charged with trying to set up a drug-dealing network following his arrest with more than a pound of cocaine.

U.S. Magistrate Young Kim ordered Hurd held until at least Friday while prosecutors and defense attorneys work out bond details before he is sent to Texas to face charges.

The handcuffed Hurd declined to comment on the charges. Asked before the hearing if he was still a member of the Bears, he said: "As far as I know." He shook his head when asked if he had talked to anyone on the team.

"Sam stands ready to fight this case, but we're going to take it one step at a time," said defense attorney Brett Greenfield, who briefly met with Hurd.

Greenfield said he is hopeful that Hurd will be released from custody on Friday.

Hurd, 26, was arrested Wednesday night after meeting with an undercover agent at a Chicago restaurant, according to a criminal complaint that says the player was first identified as a potential drug dealer over the summer as the NFL lockout was coming to an end.

Hurd told the agent that he was interested in buying five to 10 kilograms of cocaine and 1,000 pounds of marijuana per week to distribute in the Chicago area, the complaint said. He allegedly said he and a co-conspirator already distribute about four kilos of cocaine every week, but their supplier couldn't keep up with his demands. A kilogram is about 2.2 pounds.

Hurd told the agent "his co-conspirator is in charge of doing the majority of the deals" while he focused on "higher-end deals," the complaint said.

He agreed to pay $25,000 for each kilogram of cocaine and $450 a pound for the marijuana, according to the charges, and then said he could pay for a kilo of cocaine after "he gets out of practice." He walked out of the restaurant with the package and was arrested.

The criminal complaint was filed in Texas, where the U.S. attorney said Hurd faces up to 40 years in prison and a $2 million fine if convicted of conspiracy to possess with the intent to distribute more than 500 grams of cocaine, or half a kilogram.

Hurd's agent, Ian Greengross, did not return messages seeking comment. The NFL said it was looking into the incident while the NFL Players Association declined to comment.

Coach Lovie Smith said the arrest was a disappointment and a "total surprise," adding that Hurd was still a member of the Bears for now.

"Sam wasn't in meetings this morning and that's how from there of course we started searching trying to find out why a player wouldn't be here," Smith said. "There was no tipoff, didn't know it was coming."

Smith said there was no reason to believe Hurd had problems when the Bears signed him before the season.

"No issues, no reason. I'm in shock over it. I never saw it coming," Smith said. "But just like I think I know most of you, you don't really know what people do once you're not with them. But I know that anyone we bring through here, we've had an extensive search to find out everything, if there is something out there, and that wasn't the case. There was nothing we knew about Sam."

Hurd, a 26-year-old native of San Antonio who played college ball at Northern Illinois, played for five seasons with the Dallas Cowboys and is now in his first season with the Bears. He has contributed mostly on special teams, playing in 77 games overall with six starts and two career touchdowns. He has played in 12 games this year, catching eight passes for 109 yards.

The complaint says an informant tipped off authorities in Texas in July, leading to an investigation in which an unidentified acquaintance of Hurd's "negotiated" for approximately five kilograms of cocaine on the player's behalf.

The Bears agreed to a three-year deal with Hurd that was announced on July 29 -- the day after federal authorities say he had agreed to a "consensual interview" with Homeland Security investigators over $88,000 in cash that had been seized in a car he owned in the Dallas area.

The deal was announced on July 29 -- the day after federal authorities say he had agreed to a "consensual interview" with Homeland Security investigators over $88,000 in cash that had been seized in a car he owned in the Dallas area. The money was inside a canvas bag that authorities said was covered in a plant-like material that tested positive for "properties of marijuana."

The acquaintance told authorities that Hurd "routinely leaves large amounts" of money in his vehicles, while Hurd said the money was indeed his and that he had given the car to his acquaintance, a car shop employee, for maintenance and detail work.

Hurd showed authorities a bank statement he said showed he had withdrawn $88,000 from his account, but authorities said it did "not reflect the transactions and amounts" he claimed.

Teammates said they couldn't believe what they were hearing.

"It's a situation that you don't, I don't, want anybody to be in, especially a close friend, a teammate that I've been playing with now for four or five years," said wide receiver Roy Williams, who played with Hurd in Dallas before being reunited on the Bears this year. "Especially a guy from Texas with a wife and a daughter. ... I know it has to be tough for him because he has his family."

Linebacker Brian Urlacher said it's sad for Hurd, who he called a good teammate and good guy. But he said it won't affect the team's play.

"Football-wise it's not going to be an issue," Urlacher said. "We'll go out there and practice like we do every day and hopefully put it behind us when Sunday gets here."

In 2009, four years into his NFL career, Hurd established a charitable organization, Running with the Hurd, aimed at mentoring kids. The organization sponsored a football camp in the South Texas city of Harlingen last year.

In 2008, Hurd's sister, Jawanda Newsome, told the San Antonio Express-News that her brother was paying to fix up their parents' home as well as covering his younger brother's junior college tuition.

Newsome said she worried about her brother because he was so prone to give his money away.

"Everyone knows he has a generous heart and is not the kind of person to say no," said Newsome, who didn't immediately return calls Thursday. "I kind of get upset because people take advantage of him."

Linebacker Lance Briggs said the Bears were going to focus on practice and Sunday's home game against Seattle.

"You hate to see this happen to anyone. That's just it. We all make mistakes," Briggs said. "You don't go through a football season without distractions. Distractions are expected. This is a game where we're professionals and you have to approach it that way.

"There's a sports side, there's a business side and then there's a personal side. And, when it comes to business as a professional, you have to take care of business."