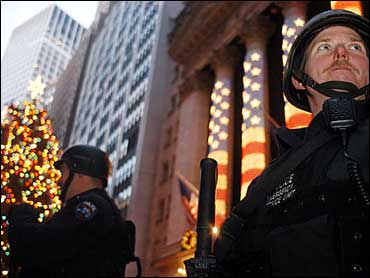 From airports to power plants to city streets, the nation was at high alert for terrorism Monday amid a threat that officials described as the most grave since Sept. 11, 2001.

But the top federal counterterrorism official told Americans to "just go about your business."

"I think it's very, very important to send a message to the terrorists of goodwill and resolve," said Tom Ridge, making the rounds of nationally broadcast morning news shows. He said the Bush administration wants people to "be vigilant and have a good communications plan under way."

The decision Sunday to raise the terror alert from yellow or "elevated" to orange, or "high," led major cities and transportation hubs around the nation to increase security patrols.

After President Bush on Monday convened a meeting of the Homeland Security council, Ridge reiterated to reporters that the intelligence community considered the new threat "the most significant threat" to the country since the terror attacks of Sept. 11, 2001.

"We've never quite seen it at this level before," Ridge said.

"It's about the number of reports that we received, the credibility of the reports, some of the language used," Ridge said on the CBS News' Early Show.

Late last week, officials tell CBS News, analysts were ordered to rescrub the raw data and turned up something that raised the alarm.

Officials are unaware of a specific target or means of attack, but some of their intelligence mentions New York, Washington and unspecified West Coast cities, said a senior law enforcement official who spoke on condition of anonymity.

Once again, intelligence has picked up signs that al Qaeda is still looking at ways to use aircraft as weapons.

Ridge, however, tried to reassure Americans traveling by plane for the holidays. "Make no mistake about it, aviation is far more secure than it's ever been in the history of the country," he said.

And he urged Americans not to disrupt holiday plans. "If you've got travel plans, travel," he said. "We cannot quit being America."

Orange means a high risk of terrorist attack. Since May, the level had been at yellow, or an elevated risk, and in the middle of the five-color scale. The nation has gone to orange alert four times: for the first anniversary of the Sept. 11 attacks, because of reported threats in February 2003, at the start of the Iraq war in March 2003, and after terror bombings in Saudi Arabia and Morocco in May of this year.

The lowest two levels, green and blue, and the highest, red, have not been used since the system was put in place in early 2002.

The heightened alert prompted heavier security at buildings ranging from nuclear plants to shopping malls, and was expected to cause delays at many of the nation's airports and border crossings.

Thousands of state and local law enforcement agencies have received an FBI advisory urging special notice of sites that could be a conceivable target and potential security upgrades, the official said.

Ridge says operations centers are up "across the board" — including the Defense Department and the Pentagon, reports CBS News White House Correspondent Peter Maer.

The FBI's Joint Terrorist Task Force in Philadelphia set up a command post to receive and check out tips, said FBI spokeswoman Linda Vizi. Residents who hear or see something suspicious should call 911 if they think a threat is imminent or the FBI if it's something that can wait, she said.

"People shouldn't determine in their own mind whether they think it's significant, they should let us take a look at it," Vizi said.

Patrols were increased immediately at Florida's Port Everglades at Fort Lauderdale, where some 50,000 passengers were on 15 cruise ships, port spokeswoman Ellen Kennedy said.

Many airports resumed or were planning to resume random vehicle searches, including those for Dallas-Fort Worth, Miami, Minneapolis-St. Paul, Philadelphia and San Francisco. In some cases, all cars will be searched, said Doug Wills, spokesman for the Air Transport Association, the airline industry's main trade group.

Hours after Ridge's announcement, the State Department issued a worldwide caution warning U.S. citizens overseas that they may be terrorist targets.

Many shrugged off the warning. Even those who said they were nervous didn't think the alert would change their plans.

"What are we supposed to do differently? Either they're going to bomb us or they're not," said Curtiss Jacobs of Lafayette, California, who was meeting friends for lunch in downtown San Francisco. "You just have to live your life."